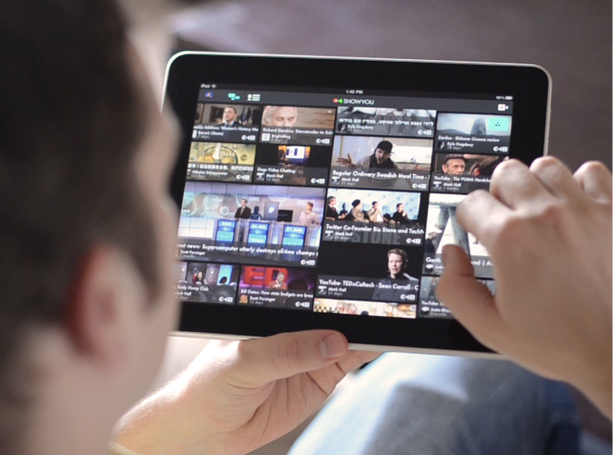 Online video startup Vodpod is launching a new app today, Showyou, which is essentially a Flipboard for videos. Launched as a free iOS app for the iPad, iPhone and iPad touch; Showyou allows you to access all the videos your friends and contacts share on social neyworks.

You can also follow people on Showyou, comment on videos, and share videos to your social networks and within the app. The feed itself will only contain Tweets, Facebook updates and other messages that include videos. To start, Showyou will include and allow viewing of videos from YouTube, Vimeo, and TED (you also won’t be able to access licensed content like TV shows from the app). In the coming weeks and months, the startup says that users will be able to share and view videos from many publishers so long as they’re HTML5 and iOS compatible.

Mark Hall, CEO of Remixnation (the company behind Vodpod and Showyou), tells us that the app is trying to add a social layer to video viewing. YouTube and other video sites lack this element and it can be difficult to filter your Facebook and Twitter streams to focus purely on viewing video. Hall also believes that users want to access this content on a mobile device, like an iPad, and does not plan on extending the application to the web. As for making money, Showyou plans to display cost-per-view, click-to-play ads within the app and may experiment with a subscription service.

Hall adds that the company used much of Vodpod’s core, underlying technology to build Showyou. Launched in late 2006, Vodpod has over 1 million registered users who have collected videos from over 20,000 different video sites.

ShowYou’s interface is sleek, especially on an iPad, but I’m curious if consumers will want a dedicated app for social video. I like apps like Flipboard because it aggregates content from all of my news feeds and social networks in one place.