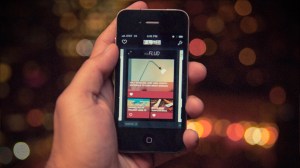 FLUD, a news reader app for the iPad and iPhone, announced today that it has raised $1 million in seed funding from a flock of notable angel investors. The round was led by Quicken Loans Founder and Cleveland Cavaliers Owner Dan Gilbert and ePrize Founder Josh Linkner, through their new venture fund Detroit Venture Partners. Other investors include Ludlow Ventures and Behance Founder Scott Belsky.

Since launching in August 2010, the FLUD team has been working part-time on its news reader app, so Founder Bobby Ghoshal said that the startup will use its new funding to go after top engineering talent — and begin working on the project full time. At present, FLUD is only available on the iPhone and iPad, so the team will push towards becoming device and platform agnostic. With the new funding in tow, Ghoshal said that he expects FLUD for Android to launch within the next few weeks.

As an app that aggregates news feeds, you might be inclined to group FLUD in with other news apps like Flipboard and Pulse, but the founder tells me that the team has been working aggressively to reduce its reliance on RSS by building content partnerships with top publishers and news networks. And Ghoshal balked when I referred to FLUD as a “news reader”, telling me that the startup is trying to build a social news ecosystem that isn’t just another RSS-based news reader or social magazine (I think that’s a dig to you, Flipboard).

While the news reader was an important first step, his vision for FLUD builds a real peer-to-peer, social component on top of the traditional news reader app, but not just by relying on social networks to share. Ghoshal said that he wants to “go after realtime experiences of the kind of news that affects one person at a single point in time based on where they are, not who they know”. Right. The team is currently developing that underlying technology, but it sounds like FLUD will be adding some location-based services to serve us with hyper local news. (And probably deals.)

For those unfamiliar with the news reader, what’s great about FLUD is that it initially offers 25 curated feeds to choose from, but the options are unlimited. You can add as many feeds as you’d like, filling FLUD’s template through its list of featured feeds or by a simple keyword search, and a page is automatically created and filled with news from your chosen site.

On your iPhone, each feed fits neatly on screen, which highlights each site’s content, and both iPhone and iPad apps employ a scrubber that calls up a scroll bar, allowing you to quickly swipe past other stories. FLUD’s design and UI is sleek and impressive, I’m definitely a fan — I think the app does a great job of eliminating the feed mish-mash that’s part of so many mobile news reading experiences.

FLUD is nearing one million users, and as long as they can avoid the slow loading of previous versions, I think it could give your other news readers a run for their money.