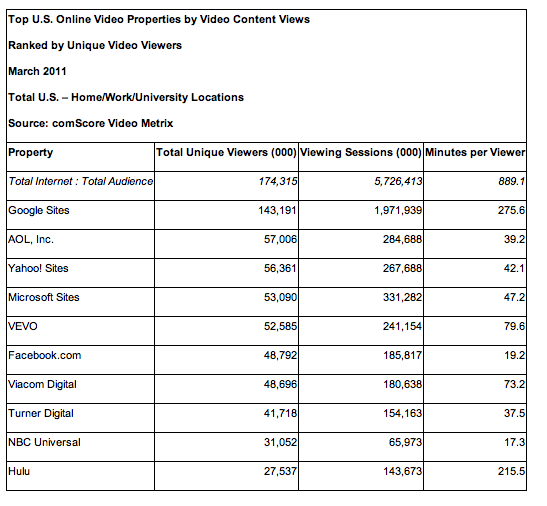 Online video views continue to rise. ComScore has released data from its Video Metrix service, showing that 174 million Internet users in the United States watched online video content in March for an average of 14.8 hours per viewer. That’s up from 170 million users in February. In total, the U.S. Internet audience engaged in more than 5.7 billion viewing sessions during March (compared to 5 billion in February).

So why did AOL jump five spots in the past month? There are a few possible reasons for this, but the main one is because comScore is counting video viewership differently than before. ComScore says that as the data analysis company switches over to UD, (unified digital measurement); AOL’s online video views have been boosted.

And of course, AOL has also recently become more bullish on video content and is ramping up video production on its properties. AOL bought video syndication network 5min last Fall for this reason. And in January 2010, AOL acquired StudioNow for $36.5 million to integrate a solid video creation platform into its content business. And AOL acquired the Huffington Post in February and closed the deal in early March. Videos from the Huffington Post are also contributing (and we are doing our small part with TCTV). 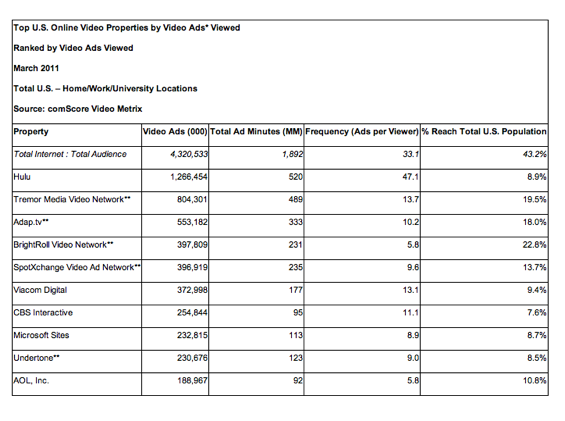 Disclosure: We are owned by AOL.