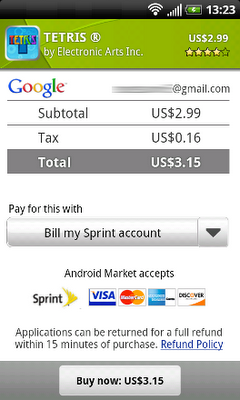 One of the big holdups in terms of paid applications on Android has been the lack of great billing options. In the beginning, there was Google Checkout, but relatively few people use that. So Google came up with a better idea: tying payments into carrier bills. They were quickly able to get both T-Mobile and AT&T on board with that. And today a third big U.S. carrier comes on board: Sprint.

Google says that a phased roll-out of the new option is underway right now and should reach all customers in a few days. When it’s done, Android users on Sprint will see an option to “bill my Sprint account” in the Android Market payment area. Such a payment won’t require the user to enter any other payment information, and the charge will show up on your monthly Sprint bill.

As Google notes on their Android Developers blog today:

We believe that Direct Carrier Billing is a key payment option because it lets users purchase and pay for apps more easily. It’s also important because it offers a convenient way to buy in regions where credit cards are less common.

Along with the U.S. carriers, Google recently launched carrier billing in Japan with SoftBank, KDDI, and NTT DOCOMO.

Of course, they’re still missing the big fish in the U.S.: Verizon. Google would not comment on when or if that final deal might happen. You can be sure they’re working on it though.