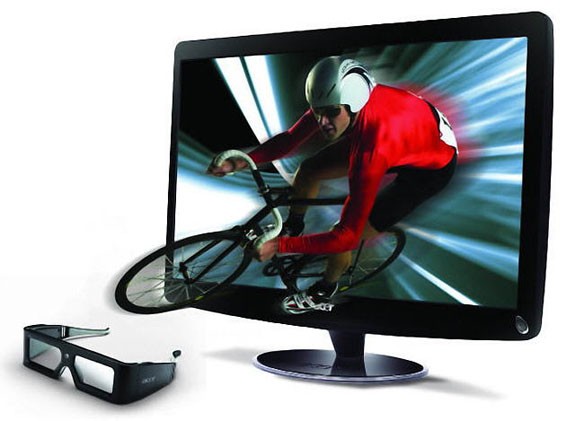 Acer isn’t new to the 3D monitor game. The company released the GD235HZ way back in the wild days of 2010 and the firm’s latest monitors are a nice step down the evolutionary trail.

The HN274H stretches 27-inches from corner to corner and features a 100,000,000:1 dynamic contrast ratio. The $689 monitor also ships with a set of Nvidia 3D glasses and the monitor itself features a built-in IR emitter, eliminating the need for that pesky external box. Inputs includes one DVI-D, one VGA, and three HDMI 3D inputs, making this the first 27-inch monitor able to accept 3D signals over both DVI-D and HDMI.

THe 23.6 HS244HQ (pictured) is much of the same with the sans one HDMI input and the included 3D glasses feature Acer branding. The dynamic contrast ratio is 12,000,000:1 and the 120Hz screen has a quick 2ms response time. Just like its big bro, the 23.6-inch version also carries a premium price of $450 MSRP. Both should be hitting major electronic retailers as soon as today.