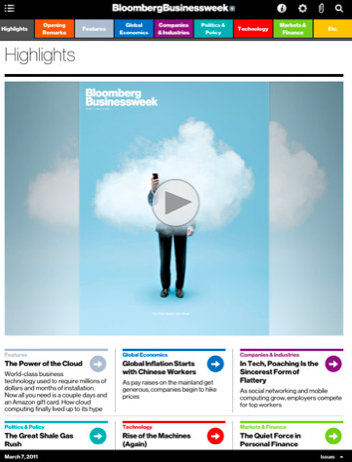 Lost amid the uproar over Apple’s in-app model change was that fact that their new in-app subscription service creates the first real opportunity for news publications to thrive in the Internet-connected world. Why? It’s connected to iTunes (and as such, millions of credit cards) and it’s extremely simple. But due to some of Apple’s demands — namely, that customers be in control of offering up their own information — publications have been slow to adopt the new service. So it hasn’t really been put the the test. But it’s about to be.

Earlier today, Bloomberg Businessweek released their iPad app. Along with it comes a subscription option administered by Apple. You have one choice: after your one free trial issue, you must subscribe for a monthly fee. The cost? $2.99. Yes, for the entire month. It’s almost shocking because it seems downright fair.

For the past several weeks, everyone has been up in arms about The New York Times’ humorously convoluted paywall. The price to access their content from the iPad? $20 a month — and that doesn’t include other access points. It’s both confusing and seemingly overpriced — it’s actually a much better deal to subscribe to the paper itself and then get the digital access (including tablet access) for free.

But Bloomberg Businessweek takes a product that is $4.99 an issue on the newsstands — or roughly $50 a year if you sign up for a subscription — and gives it to you for much cheaper. Again, shocking in that it makes sense (distribution costs are removed, etc) and that a company is actually doing it.

Erick was underwhelmed by the app because it does little more than take the content that’s in the magazine each week and digitizes it. And most of the content you can find for free on Bloomberg Businessweek’s website. But there are still plenty of people that pay for the print version each week — all they did here was make it a better deal for iPad users.

And I actually like the app. It’s simple — which I mean as a compliment. It isn’t cluttered with gimmicks and hard-to-understand controls. It flows nicely. And each issue weighs in well under 100 MB, which is something none of the other newsstand transplants can say.

So far, those who have downloaded it and reviewed it in the App Store seem to agree. Many talk about just how fair the pricing is, and just how well the app works as intended. After over 50 reviews, it has a 5-star average. In the magazine-to-app world, this is completely unheard of. Normally, it’s the exact opposite: users bitching about unfair pricing and a confusing app experience as one-star ratings abound.

Again, it looks like Bloomberg Businessweek may be the first to get the transition right. And so the new subscription model can really be put to the test. (Yes, The Daily puts it to the test as well, but it exists only on the iPad — it didn’t have to transition from the print world.)

Other publishers are likely to be torn as to whether they hope it does rise or not. On one hand, a successful magazine on the iPad means everyone has a shot in this new frontier. On the other, many are likely unhappy with the $2.99 a month price. If a weekly gets that rate, what’s a monthly worth? $1.99? $0.99? Many of them are still humorously trying to sell issues for $5 a pop on the iPad.

It was a decade ago that Apple proved was seemed unbelievable at the time: that people would pay for music online. It simply had to be accessible and the price had to be right. They created that environment with the iTunes Store for music. And now they’re trying to do it for media with in-app subscriptions through the App Store. If publications stop resisting the changes, it may still work.