The Chevy Volt and the Nissan Leaf are enjoying lots of free publicity right now. Each of their unique approaches to cleaner mobility has drawn a lot of hype. What about the car that started it all? What’s the next step for the Toyota Prius?

Though battery technology does not yet rival the energy density of gasoline, that hasn’t stopped the Chevy Volt and Nissan Leaf from trying. Toyota, with their more than 14 years of hybrid experience, must have a better solution, right?

Toyota has been investing significantly in their Prius “plug-in hybrid” Prototypes: PHEVs offering a combination of an internal combustion engine and a battery electric vehicle. Has their worked paid off? We got one week with the Prius PHEV to find out if it’s energy solution meets our needs. 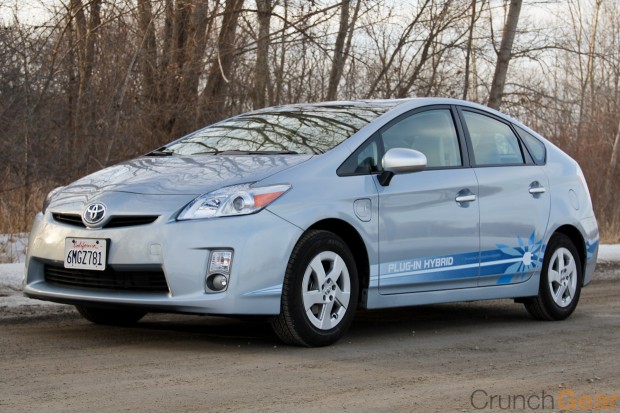 The car appears to be a normal Prius. Aside from some lower body graphics and a cutout out for the plug near the driver-side fender most of the changes involve the electric powertrain. The older Prius’ nickel-metal hydride battery gets replaced with a bigger, more powerful lithium-ion pack. Ancillary equipment such as high-voltage lines, battery charger and thermal management were also added, but aren’t immediately visible.

The new battery can achieve a full charge in about three hours from a 110-volt outlet or in about an hour and a half with a 220-volt. I have a 220-volt outlet in my garage, so charging was never an issue. 220-volt outlets aren’t uncommon in US homes — for instance most dryers and electric stoves have them, though they may not be easily accessible for vehicle plug-in. 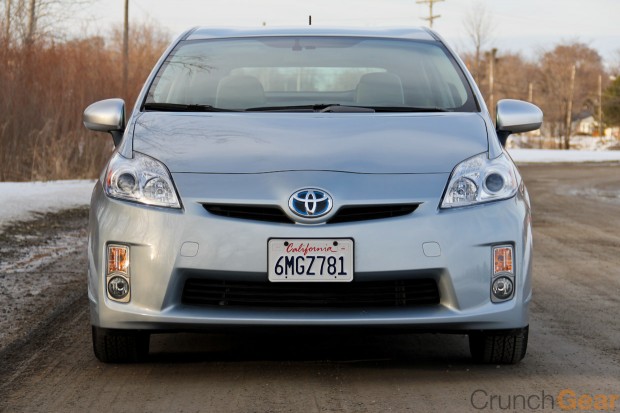 Because the Prius PHEV is in the experimental stage, Toyota will be using the data from the fleet of 150 prototypes to determine if the battery size is adequate for most daily commutes. I also wanted to do my own experiment to see whether or not the Prius PHEV would fit my (mostly minimal) driving habits. For this review, I kept a driving journal including miles driven, charge times and fuel economy in both electric-only and hybrid-electric modes.

I logged many entries the week I spent with the Prius, but for the sake of brevity I’m listing the three most relevant scenarios. 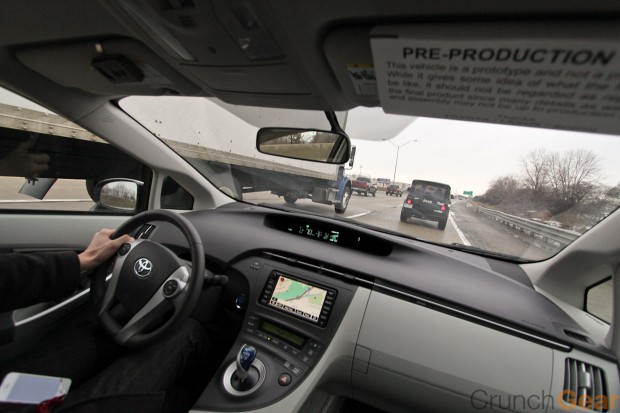 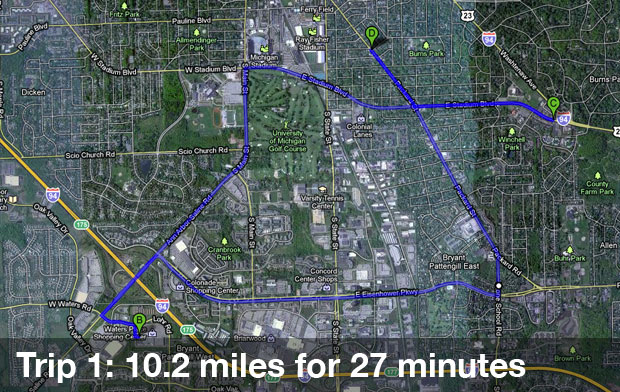 My first commute involved driving to two stores on different sides of town for general errands. The first leg to get a new lens for my camera was only 3.7 miles — this, of course, was done on all electricity. From a full charge the battery meter showed 13.6 miles of range, at the destination it showed 9.6 miles left. Not bad.

Afterwards, it was on to Trader Joe’s for some groceries, exactly 5.2 miles away. For this leg the battery meter underestimated range by 1.4 miles. Still, not bad. 3 miles of all-battery range were left when it was time to go back home. I live less than 3 miles from the Trader Joe’s, so I decided to push the car a bit harder on the way back. Once during the trip the engine briefly kicked on to assist an apparent hard acceleration. I made the 1.3-mile trip back with 0.9 miles of battery left. 10.2 miles traveled with 0.9 left means the full charge would last 11.1 miles under these particular driving conditions. I was impressed because it was 22 degrees F that day and electric cars have lower range in the cold. That was all the driving I had for the day, but if I needed to go anywhere else it would only be a 1.5-hour wait until the battery could be fully charged. 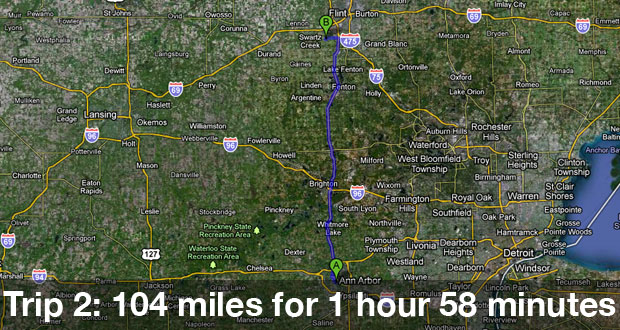 This next drive involved about 100 miles of expressway driving at 70 mph. The fully charged battery estimate was 11.8 miles. This estimate always differed depending on many variables, but I noticed it was less when cold out. The 11.8-mile estimate ended up being 15.3 miles before the standard hybrid mode the Prius is famous for kicked in. I ended up getting 15.3 miles in EV mode because only two of those miles were in the city, the rest were on the expressway driving 70 mph.

Interestingly enough, the Prius’ battery doesn’t have enough current to maintain speeds over 65 mph without assistance from the engine. Much of those expressway miles were assisted by the engine, hence the increased battery life of 15.3 miles. After the hybrid mode took over the energy sources shifted from either the engine or battery, or a combination of both. This all depended on a variety of constraints involving battery state and road conditions.

Nonetheless, the Prius PHEV was able to get me to my destination and back (100 miles) with a fully charged battery and less than 2 gallons of gas. If I were in a Nissan Leaf the trip wouldn’t have been possible — though, to be fair, the Leaf isn’t officially rated for a trip that long, except in marketing materials. 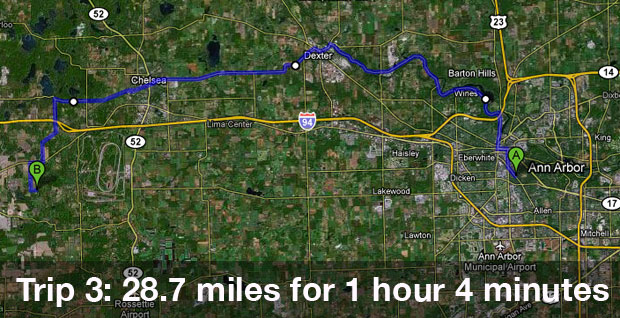 Trip 3 wasn’t much different from Trip 2, except that the route had many stop signs along a 2-lane road. This 28.7-mile trip to get raw milk from the local dairy farm started with 14.3 miles worth of gasoline-free driving. Eco mode, which keeps pedal pressure minimized during acceleration, is hugely responsible for the better range. With it activated the car was less motivated to accelerate, saving the battery from my lead foot.

After the charge ran out the Prius resorted back, once again, to the familiar hybrid mode. However, because the Prius PHEV’s electrical system runs at a higher voltage the average fuel economy was 62 mpg — much better than the normal Prius. Drive routes with frequent stops actually decrease gasoline consumption; the car has a chance to capture kinetic energy from regenerative braking. A time out for the engine, if you will.

Is the Prius PHEV the next step? 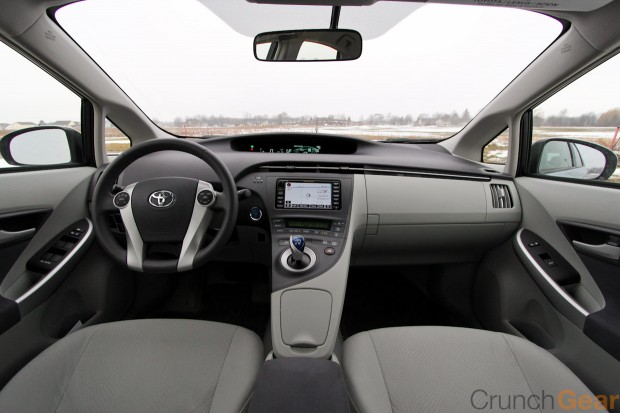 From my experience behind the wheel of the Prius PHEV, I’d say that the advantages offered make it a very compelling alternative to battery-only electrics. Even though two of the three trips involved driving further than 12 miles, keep in mind I spent a lot of time driving the car that week for this review. If it were a normal week, my daily mileage would have been less than 20 miles.

Not only are plug-in hybrids the next step because of their convenience, but the more robust lithium-ion battery vastly improves fuel economy over the regular Prius when operating in the hybrid-only mode.

Currently the estimated price is $27,000, but that’s not an accurate number for a number of reasons. The first few vehicles are prototypes; the battery size hasn’t been finalized. Toyota engineers are collecting data from all the prototypes running around the world in an attempt determine what range would be appropriate for most drivers. It’s not 12 miles, but that’s not far off either. If the production Prius PHEV could hit 20-30 miles, then Chevy and Nissan will again have to worry about the Prius.