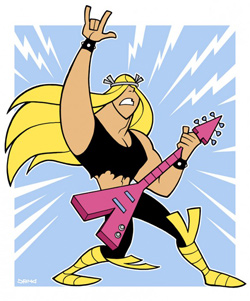 Activision now says that Guitar Hero hasn’t been outright cancelled, but merely placed on hiatus. The publisher had said in February that it was going to disband the Guitar Hero business unit, and that the 2011 edition of the game had been cancelled. What gives?

Activision tells GamesIndustry.biz that rather than canceling the series outright, it’s simply changing the way the franchise works. It will no longer be a yearly release à la Madden, but that Activision will still support the brand. Maybe a release every two years? Maybe a different way to support the franchise, with special DLC and the like?

Somewhat related, Ubisoft recently said that the world needed new game consoles in order to facilitate innovation and whatnot, to tap into the newly developed technologies and techniques that have popped up since the Xbox 360 was designed.

I suppose Ubisoft is unfamiliar with something called a PC? Seems to me there has been plenty of technological development there, and I don’t see Ubisoft treating the PC with anything but contempt.