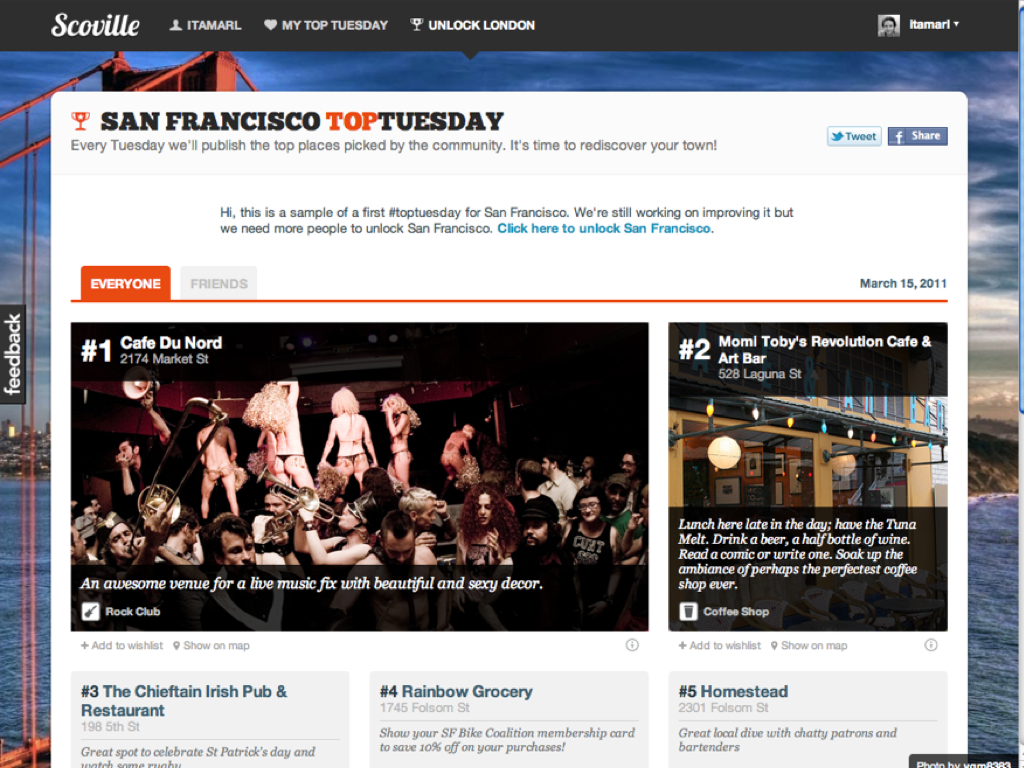 If you are a lover of spicy foods or hot sauces, you may be familiar with the “Scoville Scale”, which measures the degree of spiciness of chili peppers and their many conveyances.

Launching today in public beta is Scoville, a startup aimed at taking the temperature of local destinations. Taking a page from the Scoville Scale, the startup wants to help you record, discover, and share hot or trending destinations. Just as Twitter has its #followfriday hashtag, in which users suggest their favorite people to follow every Friday, Scoville is employing #toptuesday to give locations their due.

For the past month, Scoville has been in private beta, gathering data on Fourquare check-in habits. At the outset, only Foursquare users with 1,000+ checkins were accepted. The beta testers (which include uber evangelist Robert Scoble, Foursquare Founder Dennis Crowley, and open web standards promoter Chris Messina) were encouraged to log in at Scoville.com using their Foursquare account, pick the places they’d loved visiting over the past week, and to share them with their friends and followers. More than 5,000 people signed up for the private beta.

Founded by entrepreneur and engineer Gerald Goldstein and former product manager at Amazon and Visa Itamar Lesuisse, Scoville recently raised $400K in funding from Seedcamp, Kima Ventures, and Jaina Capital. The founders have been using the seed funding to grow Scoville’s engineering team, and Lesuisse tells me that the startup intends to launch “many new ways to share and discover places we love” — #toptuesday is just the beginning.

Scoville is currently using the data it has collected from its private beta to feed its recommendation engine, bringing together the destinations you’ve “liked”, your social graph, similarities with other users, and reputation (Lesuisse says they are using Klout’s API for the moment) to serve its users with a fully-personalized list of places each week.

The co-founder says that his vision is to leverage the “small signals infrastructure” — or the many signals we send on a daily basis, like check-ins, messages, and images — to reinvent the way people explore cities. And to attack that much-coveted domain: The interest graph. “These geo-located signals carry a great value when it comes to building users’ interest graph”, Lesuisse said.

He also said that he sees Scoville becoming a crowdsourced version of Time Out magazine — a fullservice discovery engine for local fare. Sounds good to me.

What’s more, Techcrunch readers can get an exclusive peak at the startup’s service by logging in here using your Foursquare account. Unfortunately, non-Foursquare-ers will have to get on the waiting list, but Lesuisse said that Scoville will soon be extending its service to include the uninitiated as well.