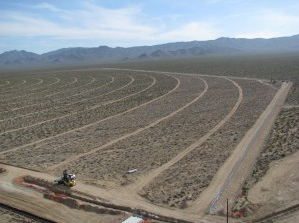 Developers of large-scale, solar power plants BrightSource Energy Inc. closed another $168 million investment, the company announced today — this time from Google corporate. The funds will go towards the completion of the humongous, Ivanpah solar power tower plant in the Mojave Desert now under construction (image, right).

Three years ago, Google.org invested $10 million, and took an equity stake in BrightSource. This deal hailed from Google’s Green Business Operations team, however, and the funds are to be applied towards the completion of the Ivanpah project not Brightsource’s overall business, a Google spokesman confirmed.

Google’s director of Green Business Operations, Rick Needham, wrote more about the company’s reasons for investing in this project in an official company blog post today. He expressed hope that moving a solar project of this magnitude forward in Nevada, that could supply power to California, would reduce the cost of clean energy from renewable sources for Google, and the market overall. Google still buys most of its power from the grid.

According to the U.S. National Renewable Energy Laboratory, the Ivanpah Solar Electric Generating System (ISEGS) is expected to be operational for 25 years after completion around 2013, and is expected to generate 392 gross megawatts of solar energy.

Conservation and Native American groups have recently filed lawsuits against BrightSource, expressing concern over the company’s environmental impact to the Mojave, especially endangered tortoises and delicate habitat there.

At least Google’s not — or are they — investing in nuclear. BrightSource’s website notes that Ivanpah, when completed, is expected to almost double the amount of solar thermal electricity produced in the U.S. today.