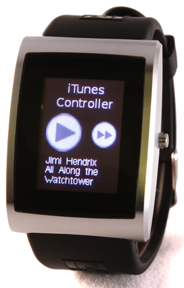 Mobile phones have evolved into smartphones because these devices have basically become computers in the form of a cell phone. Besides browsing, one of the key components that make smartphones as interactive as a computer are the apps that can be used within the device. And it’s interesting to consider how we can add this element of computing and interactivity to other gadgets we use in everyday life. Today, Y Combinator-backed startup InPulse is launching its wrist watch, which adds elements of smartphone-like computing to a watch.

Founder Eric Migicovsky says that he is a avid cyclist and wanted a way to check his email, SMS messages and calls in a hands free devices. Using a smartphone on his trips didn’t make sense because he wasn’t able to actually use his hands while cycling. So he started thinking about how he could add smartphone capabilities to a watch, which he always wore when exercising. Thus, InPulse was born.

The device connects via Bluetooth to your phone and will deliver email alerts, SMS messages and calls directly to the watch. The watch can connect wirelessly to all kinds of host devices: computers, laptops, and smartphones and works best with Android, Blackberry, Mac, Windows and Linux (adding iPhone support is in the works, but Apple requires special chips to be built into the watch.) It’s a two way connection, so inPulse can send packets back to the host based on user interaction.

As for the specs, the device’s screen features a 1.3″ 96×128 pix full color display. The watch also includes a
ARM7 microcontroller running at 52MHz; 32kB total program space, 8kB RAM; CSR BC4-ROM Blue (L2CAP); aver-the-air programming; a vibrating motor; and a 150mAh lithium-ion polymer battery. The device charges via microUSB and the battery apparently lasts up to 4 days depending on display/wireless use. The device comes in two colors: the silver version is $149 and the black anodized version if $199.

Of course, a bluetooth enabled watch is not new. For example, Fossil teamed up with Sony Ericsson a while back for a similar device. Another competitor is Casio’s Bluetooth watch. What is innovative about InPulse is the ability to create apps for the device, which then adds some pretty impressive functionalities to a watch.

For example, one app allows you to get notifications on the watch, and lets you see your messages coming in without taking out your phone. There are many use cases for that feature, but namely, it can be rude to check your phone for emails in the middle of a serious meeting or event. Another beta user (the device was soft launched earlier this year) is a paramedic who needed both hands free for work.

InPulse has opened up it platform to developers and so far over 30 apps have been created for the watch. These range from making your watch into an iTunes music controller to becoming a PowerPoint presentation remote control (Migicovsky used his InPulse watch to present and pitch during Y Combinator’s demo day a few weeks ago). You can also check-in to Facebook Places from the watch. The beauty of the device is that you can program it to display anything via apps. Another popular use case is to programmers is display real time server stats for programmers on the go. There’s even a site devoted to featuring the watch’s apps.

While there was recently a Yale hackathon dedicated to developing for InPulse, the startup is sponsoring a hackathon at the Hacker Dojo on April 17. You can find details here.

So far, InPulse has sold 600 devices to beta users. As we increasingly become more reliant on constant connectivity, devices like InPulse will certainly make consumer’s lives easier. For example, my phone accompanies me to the gym and I constantly check it while on the treadmill. And I wake up in the middle of the night to check emails, etc. But during my pilates lesson, I’m unable to check my email and keep my phone by my side. A watch that showed me my missed calls, emails and latest news headlines would be ideal for me.

Clearly, InPulse’s users are those who want and need to be connected at all times (like me). But it’s important to note that some consumers may be willing to abandon their apps, emails, and phone calls for a few hours while their hands are tired. Of course, in the tech world, those people are few and far between.