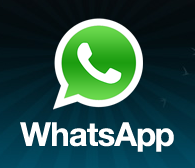 Messaging apps that let you use your smartphone to text or chat with your friends or even large groups of people, often free of charge, are red hot. We’ve heard from a reliable source that one of the companies making waves in the space, WhatsApp, has just secured $8 million in financing from Sequoia Capital, and possibly other investors.

WhatsApp enables users of iPhone, Android, Blackberry and Nokia Symbian60 devices to exchange text messages, images, audio and even video messages with one another.

I have no idea how many users or downloads WhatsApp has attracted to date, as the company prefers to keep a low profile, but I’ve heard the name of the app drop in several conversations I’ve had about the mobile messaging space.

I was actually quite surprised to find that they weren’t funded yet, especially with the track record of their co-founders, who established the company back in 2009.

WhatsApp was founded by Jan Koum, who formerly managed the Platform Operations team responsible for the critical internal pieces of Yahoo’s infrastructure, and Yahoo’s former VP of Engineering Brian Acton.

Another former Yahoo exec, the company’s ex-Senior Engineering Manager Charles Kung describes himself as an investor and advisor to the company on LinkedIn.

Some signs that the app has already gotten some traction on the market: its iPhone app has received 28,040 ratings and hundreds of reviews on iTunes, while its Blackberry app has garnered 4,050 reviews.

Sequoia recently participated in a $10 million round of funding for Bubble Motion, which offers a popular Twitter-like voice blogging service in India, Japan, and Indonesia, and has also invested in mobile communications company Clickatell.

Other developers of similar mobile messaging apps have received funding in the past: Kik Interactive raised $8 million from RRE Ventures, Spark Capital, and Union Square Ventures, while GroupMe secured over $11 million in funding from investors like Khosla Ventures, First Round Capital, Betaworks and SV Angel, and textPlus raised $15 million from GRP Partners, Matrix, and Kleiner Perkins.

And let’s not forget that Google has a group texting app as well, called Disco.

In other words, this space is heating up fast, and investors are keen to ride the wave. I haven’t yet confirmed the Sequoia financing deal with WhatsApp, I should note, as I’ve been unable to reach them all day, although our sources say the deal is done and has already been communicated to WhatsApp employees.

We’ll update if and when we get confirmation.