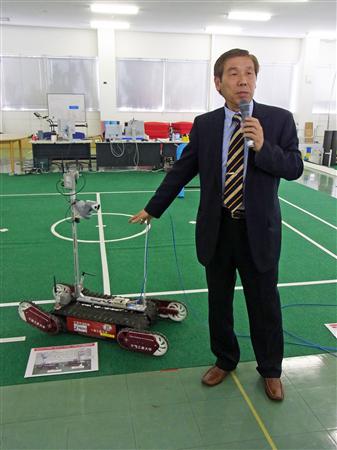 Japan’s International Rescue System Institute (IRS) unveiled a new rescue robot that can be used to take over the work from humans in high-radiation areas. Not too surprisingly, the institute announced the remote-controlled machines will be used to scope out the situation in various places at the damaged nuclear power plant in Fukushima.

The IRS says the robots can withstand radiation (up to 20 Sv currently) and are also water-proof to a certain extent (driving through puddles, for example, is supposed to be no problem).

A team of 23 of the robots will be sent to fulfill two main tasks: measure radiation and gas levels at the plant and shoot videos. Each unit is 50cm long, 1m high and weighs 27kg.

What’s important in case of the “mission” in Fukushima is that according to the IRS, the robots can be remote-controlled from 2km away (the Japanese government declared a 20km evacuation zone around the plant).