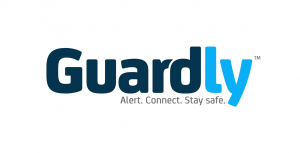 I can’t help but be amused that the personal-security platform Guardly, which launches today, was born in virtually-crime-free Toronto, where I live, and where I’ve never encountered anything more fearsome than bad weather. (Q: How do you get 20 Canadians out of a pool? A: “C’mon, guys, get out of the pool.”)

Security is a big market, though: there are a lot of people out there who do have reason to feel unsafe. For instance, a few years ago I visited a friend who had to vary her routes to and from work every day, and check in with security by radio every night, for fear of kidnapping—because she worked for UNICEF in troubled Port-au-Prince, Haiti. A personal-security app that integrated into UNICEF’s systems would have been a big help. I expect NGOs and multinational corporations would be eager to deploy such a system for staff in crime-ridden cities like Nairobi, Port Moresby, and (God help them) Oakland.

Guardly is both platform and app. The platform will let authorities and a person’s “personal security network”—maybe friends and family, maybe corporate security—collaborate with them in real-time during an emergency situation; the app lets you alert both groups with the push of a button when something goes wrong. You can also use it to message your  emergency contacts, and share photos or other media with them. (Yes, that’s right, it’s both YAGMA (Yet Another Group Messaging App) and YAPSA (Yet Another Photo Sharing App). Would someone please write some common protocols for the YAGMAs and YAPSAs? This is getting ridiculous.) The iPhone version is available now, and Android and Blackberry are on tap shortly.

The platform is more interesting than the app: it makes sense not just for personal security, but for medical crises, natural disasters, and the like. (The vast majority of those rescued from the terrible earthquake that hit Haiti in 2010 were saved by friends, family, and neighbors, not emergency responders.) Their freemium app model probably won’t sell like hotcakes in Toronto… but Guardly are wisely planning to internationalize to places like Mexico and Venezuela. Personal security networks—and apps—suddenly make a lot of sense in nations where the wealthiest 10-15% of the population have First World income and Third World security concerns, including corrupt and/or incompetent police.

Guardly are funded by a seed round raised from made-in-Canada consortion of Extreme Venture Partners and seven angel investors. Competitors: SOS Link (created in response to Vancouver’s nonstop random violence), Rave Mobile (spawned from the brutal gunplay of Framingham, Massachussetts), and JTrek (born of the bloody suburban horrors of Barrington, Illinois) all play in this space too. Guardly seems to be working hardest to integrate their app with security agencies, police services, the National Emergency Number Association, and corporate/university operations around the world, though — and for a security/emergency-management app, that integration is the killer feature. So to speak.