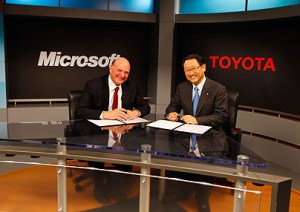 The battle for the in-dash system is just starting to heat up, as we leave the era of half-hearted in-house interfaces and enter a period where your car will be as powerful and accessible as your smartphone. Ford’s been leading this charge with Sync, and Tesla has a new approach as well, and now Microsoft and Toyota are putting their heads together to make a new platform, and like everything else these days, it’s in the cloud.

The announcement is a bit short on details, but it’s clear that this isn’t just a new GPS system using Bing. Microsoft is hoping to position itself as the connective tissue between people and their cars.

It’s focused on the 2012 Toyota hybrids and plug-ins; one of the major features will be remote monitoring of battery status. Power and range management and visualization is an under-appreciated and under-engineered feature, as any Leaf owner who thought they had 15 more miles in the “tank” will tell you.

The partnership takes the form of a ¥1 billion (~$12m) investment in Toyota’s “Media Service” R&D division. Services will roll out next year, but the full system is planned for a 2015 roll-out.

Toyota President Akio Toyoda briefly describes some other functions that are partially present in existing systems, but will likely soon be standard (from Toyota’s transcript):

For example, this new system will include advanced car-telematics like virtual operators with voice recognition … management of vehicle charging to reduce stress on energy supply…and remote control of appliances, heating and lighting at home.

And with the introduction of Toyota plug-in hybrids and electric vehicles next year…our cars will play a big role in the global expansion of what we call “smart centers” … on-board systems capable of better managing overall energy consumption of cars… driving trips…and homes.

Ballmer chimes in to note that cloud will play a big part:

These applications will be built on Microsoft’s Windows Azure cloud computing platform.

Starting in 2012, customers who purchase one of Toyota’s electric or plug-in hybrid vehicles will be able to connect via the cloud to control and monitor their car from anywhere – safely and conveniently. For example, customers will be able to turn on the heat or AC in their car while their vehicle is plugged into the grid or dynamically monitor miles until the next charging station right from their GPS system.

Additionally, customers can use these applications and services for power management as cars connect into the smart power grid. Imagine being able to tell a car to charge at the time of day when energy demand is low and therefore, the least expensive.

Admirable! Good ideas all, but really the important thing is establishing the car as just another node in your grid of connected devices. If Microsoft can establish a beachhead in the intelligent car system field, that’s a lot of leverage later on as more services start coming to cars as natural extensions of someone’s data environment. Streaming video to the backseat screens, Pandora presets in the radio, calendar notifications with map integration, that kind of thing. Making Bing drivable will also help its share on the desktop.

As usual, the main threat to partnerships like this is the tumultuous nature of tech and the danger of a stated four-year development period. While creating a global telematics platform for the world’s biggest car manufacturer is no small task, four years is an eternity and consumer demands may have shifted significantly by then. But you can’t win if you don’t play. Hopefully we’ll hear more and see some prototypes within a few months.