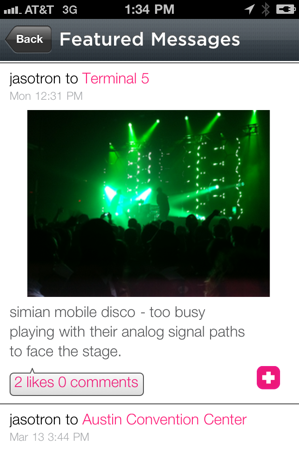 Back in August of last year we wrote about MessageParty, a new location-based chat service that let you exchange messages with people (even strangers) located nearby. But that didn’t really work out — outside of a few random events, there was never a high enough density of users for people to really interact with each other. So today the company is announcing that it’s relaunching (I’m avoiding the ‘P’ word) as something very different: location-based blogging, or, as CEO Amanda Peyton calls it, “Geo-Blogging”. The service is going live today in New York City, and you can download the iPhone app right here.

The service is sort of like Foursquare Tips — but instead of leaving notes like “The bathroom code is 1985”, MessageParty is for photos, video, and richer narratives. Say you were wandering through Central Park and you came across some particularly impressive street performers. You might take a YouTube video of them to share with friends, and you could also put it on MessageParty so that anyone else wandering through the park could see it too. In a way, MessageParty is trying to help give physical locations their own multi-media histories.

So why the switch from group messaging? Peyton says in addition to the user density issues mentioned earlier, the company also noticed that rather than chatting with other people (which was difficult given that other people were rarely on the app), users were blogging about what was going on at their current location. So MessageParty took that use-case, expanded on it, and launched what we’re seeing today.

The application is available as an iPhone app and also as a website at MessageParty.com (there are mobile web apps for phones other than the iPhone). Fire up the app, and you’ll see that you can browse through messages using three modes: Nearby (which, as you’d expect, shows messages in the immediate vicinity), the 25 nearest messages (which should show messages around the city), and then a global stream of messages displaying all content submitted to the service.

Of course, MessageParty isn’t the first company to tackle location-based blogging. Other attempts include SocialLight (back in 2005), Blockchalk, and Graffitio, which was one of the first apps to launch on Apple’s App Store. In other words, it’s been tried before, and none of these services have become close to mainstream.

But Peyton thinks that the world is finally ready to start adopting geo-blogging. She explains that location-enabled devices have become so common — and people have become so used to the idea of sharing their location — that the time is ripe for services where location is the central driver of the service, as opposed to an add-on.

I don’t think she’s wrong (I think it could be cool to fire up an app and see interesting tags left by other people). But MessageParty has a tough road ahead of it. The service doesn’t currently have any inherently viral mechanics so it’s going to take a lot of work to gain traction. The ’25-nearest’ and global views should help with the chicken-and-egg problem to some extent, but it’s going to take plenty of users to produce the hyper-local content — a photo of the record store I’m standing in front of, or a video of a violin player at my local subway stop — that would keep me coming back for more. 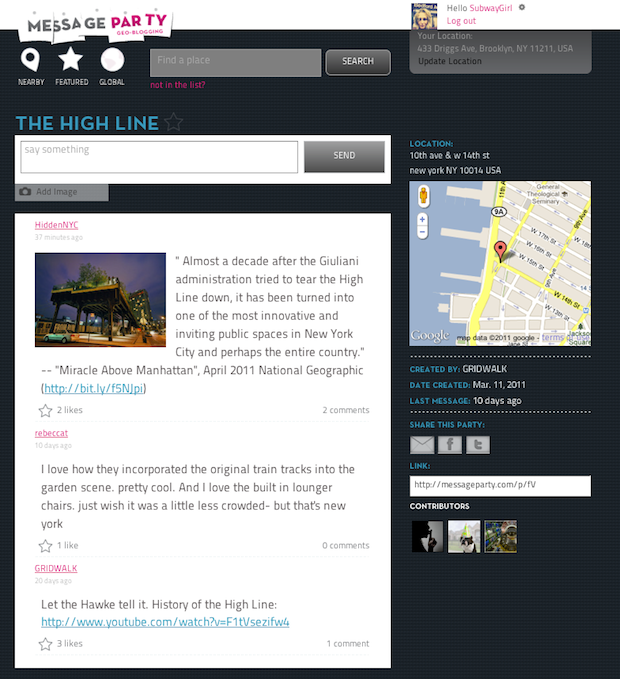