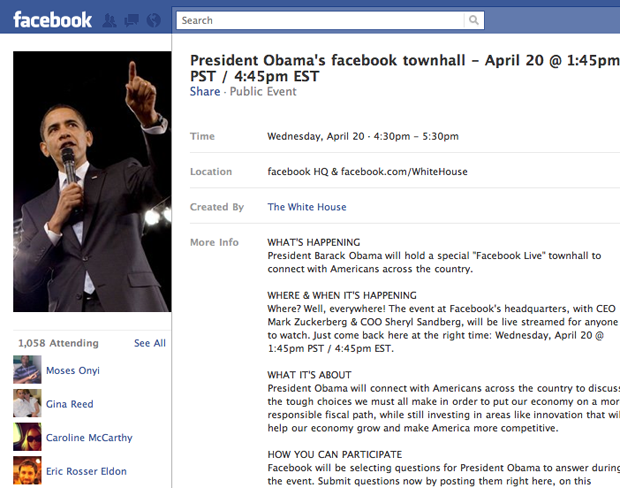 A day after his 2012 re-election campaign kicked off a Facebook-heavy voter awareness push, President Barack Obama has announced via Facebook that he will be holding a Town Hall meeting with Facebook CEO Mark Zuckerberg and COO Sheryl Sandberg at Facebook headquarters in Palo Alto this month. The event will be held on April 20th at 1:45pm PST.

Users interested in participating can submit questions about innovation and the economy via the Facebook Event wall and Facebook will select the ones that will be addressed during the meeting. As of right now 1,217 people have signed up to attend the event (which will be livestreamed) but many of the comments on the wall are unrelated to the “how to get our economy back on track through innovation” theme.

The last prominent politico to give a talk at Facebook was former President George W. Bush and the company regularly hosts Facebook Live interviews with celebrities like Conan O’Brien and Ashton Kutcher. Step your game up Twitter.