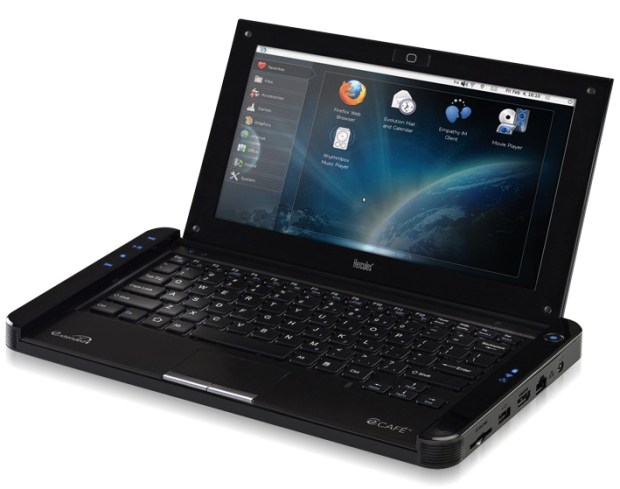 Although the netbook craze has pretty much passed over, it’s easy to remember why they were so popular for a while. Look at these little Hercules eCafe guys: they’ve got a unique design, 10.1-inch screen, 13-hour battery life, they weigh about 2.4 pounds and are just over an inch thick. At $250 plus or minus a twenty, who wouldn’t want one?

Well, lots of people, probably the ones who got burned by the last generation of netbooks. The fact is no matter how cute they are, they’re pretty underpowered and end ultimately disappoint. In the eCAfe’s case, it doesn’t really even have a real OS, but a sort of faux-OS devised by Hercules that, while it boots in a fantastic four seconds, doesn’t sound too compelling.

The specs are buried pretty deep, and for good reason: the 800MHz Arm A8 processor, 512MB of RAM, and 16GB of storage aren’t very impressive. However, it is well-provided with ports: three USB 2.0, HDMI out, a card reader, and Ethernet. But while this might have pushed a few units back in 2009, I just don’t see it making a splash in today’s tablet-obsessed world.