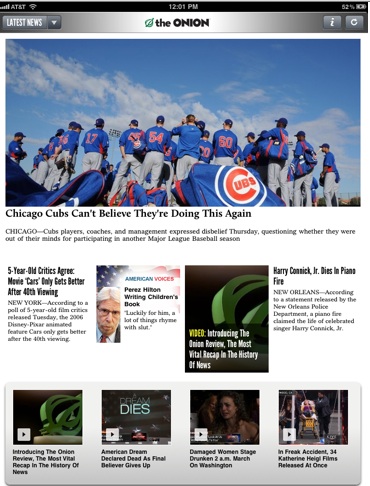 This is not a joke. The Onion, “America’s Finest News Source” (TM), released its iPad app fittingly enough on April Fools Day. IPad apps are serious stuff. This one delivers fake news stories, videos,and images from the parody site in both vertical and landscape modes.

It’s a pretty basic fake-news reading app, but it gets the job done. You can swipe through stories, watch videos, check out funny charts. Articles can be shared via Facebook, Twitter, Tumblr, and Google Reader or saved to read later via Instapaper or Pinboard. All pretty standard. From the press release:

Now, using the latest news-providing technologies, The Onion introduces a format that allows you to touch the news. That’s right. Swipe it, poke it, berate it, and it reacts accordingly.

. . . “Whatever other news applications you’ve installed up to this point can be deleted now,” said Director of Digital Baratunde Thurston. “Also, please try to avoid touching our news in inappropriate places. There are good touches and bad touches.”

The app relies heavily on HTML5, and it should be popular. The Onion’s other mobile apps on the iPhone and Android have been downloaded more than one million times.