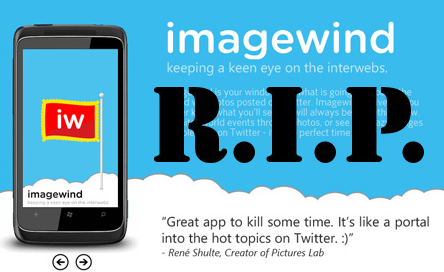 Sorry, Microsoft; we harsh on Apple and Google anytime their App Store policies result in questionable decisions, so we can’t just let yours slide.

Here’s the story so far: one-man dev house Smarty Pants Coding submits their Windows Phone 7 app, ImageWind, which automatically pulls random images from Twitter for aimless perusing and time-killing. Smarty Pants’ Roger Peters is unsure if it’ll get greenlit, as the unrestricted image feed can get a bit risque at times, but.. it gets approved! He submits an update.. and it gets approved again! He drops a few hundred bills into the application and its website, now that he knows Microsoft is down with the idea, and submits another update. This time, however, he’s turned away.

As App Review teams made up of multiple people can do from time to time, Microsoft’s WP7 Marketplace gatekeepers had had a change of heart. The response after Rob submitted his last update:

Imagewind – app unpublish request
[..] While the images shown are dynamic, per your app’s disclaimer, a portion of the images’ content is too graphic for the app to be permissible in Marketplace. In order to be permissible, there would need to be a content filter before surfacing images since users are not querying a specific type of image and are rather pushed to them.

Given this, we ask that you unpublish your app within one business day until you are able to modify your application to comply with the certification guidelines.[..]

Great! As long as Rob could fix things up within a day or two, he should be fine — right? The problem: he’s just pulling Twitter’s raw image feed, and their is no “clean” feed. If Rob wanted to nix all the potentially-dirty images out of his app’s stream, he’d have to hire an army of moderators to keep the feed clean around the clock. Not exactly an option for an indie developer just tryin’ to release something cool.

As crummy as it seems, Microsoft’s well within their rights here. Rob lucked out by getting his app through the review process twice, knowing that it was in a grey area — it’s just unfortunate that no one at Microsoft caught it before false hopes lead him to invest all that time and money.