I think we can all agree that while bass is an important part of most music, there is a limit past which it is pointless to amplify that part of the sound spectrum. This video is about going so far beyond that point that the sound starts being measured in gut punches rather than decibels. That poor phonebook never had a chance. 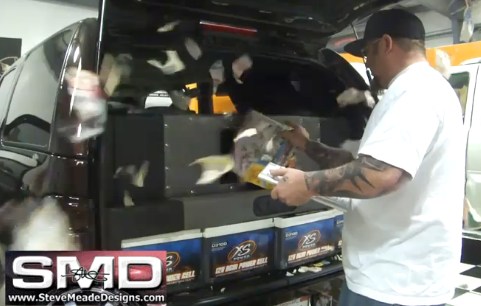 The system being demonstrated is from audio outfitter Steve Meade Designs, and is the owner’s own 2001 Tahoe. Its setup consists of “four 18-inch subwoofers, backed by a total of 13 amps and 26 smaller speakers, including 10 6.5-inch mids, and 10 one-inch tweeters.”

I like that the hood gets knocked down at about the three-minute mark.