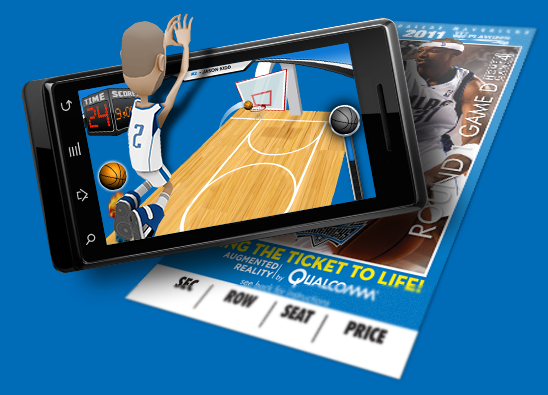 Thanks to the influence of owner and tech entrepreneur Mark Cuban, Dallas Mavericks season ticket holders will be able to enjoy a touch of the technological when claiming their 2011 playoff tickets. The Mavericks have teamed with Qualcomm to add augmented reality to this year’s playoff tickets.

Augmented Reality — or “AR” for those “in the know” — refers to a display in which simulated imagery or graphics are superimposed onto a view of the real world. In the case of these basketball tickets from the future, viewing on your Android will allow you to play an interactive game.

How does it work? Get your ticket and take out your Android phone. (This season the tickets will only work with Android, but Cuban said that he hopes to expand in future seasons.) Go to the Android Marketplace and download the “Mavs AR” app. Launch the app, point your phone at the front of the ticket, and voila! You’ll be able to play an interactive mobile game, featuring Mavs’ stars Dirk Nowitzki, Jason Kidd and Jason Terry. You can learn more about the tickets out here.

We’re glad to see Cuban bringing AR to the sports arena, but when the Mavericks launch AR-capable tickets that offer some sort of practical application, like, say, Google Goggles or Word Lens, then we’ll really be clamoring for a Nowitzki jersey.