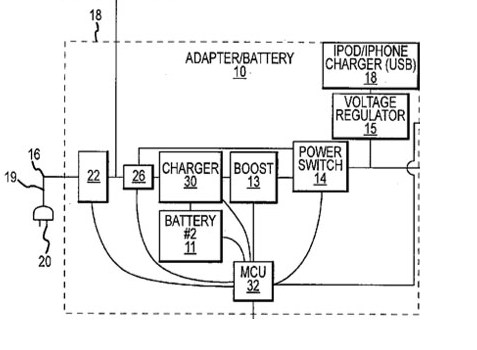 Not every Apple patent that comes down the line is worth gawking at, but these two are definitely worth a quick note. First, putting a battery in a charger is a pretty good idea — but I sincerely doubt they’re the first ones to think of this, unless it’s a very specific implementation that requires a patent. Still, it’d be nice to have, though we’ll be paying through the nose for it as usual.

The other one is interesting because it has direct interaction between touches and OS X. Unfortunately, it’s not a “gotcha” moment, though: Apple is careful to add that while the illustrations may be taken as direct interaction with the window or item on a touchscreen, it also could, in other “embodiments,” have the screen and touch surface separate.

Still, it’s indicative of the direction Apple is taking with its devices and OSes: a general convergence of touch gestures to mean certain tasks, like zooming out to see all workspaces or multitasking. We’ll see some of this in Lion, but I think there will also be some interesting new gestures in iOS 5. They have to be careful not to overload the user with shortcuts and special swipes, though: the power of iOS is in its simplicity of interaction.

[via Apple Insider and The Register]