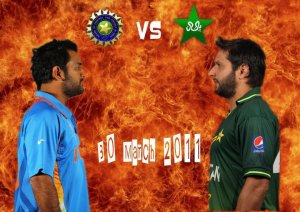 This one’s for you, cricket fans. For those not familiar with “the gentleman’s game”, we are currently in the grips of the ICC World Cup — or The World Cup of Cricket, if you prefer. “Who cares?” or “what’s a cricket?” you may be asking. Well, considering there are only five proclaimed cricket pitches in the U.S., you may have a fair point. But for countries (and cricket powerhouses) like India, Pakistan, Australia, and South Africa (to name a few), cricket is serious business.

In fact, The Economic Times is reporting that the international gambling industry collectively has more than $1.5 billion riding on tonight’s match between India and Pakistan in the World Cup semifinals.

Considering the combustible relationship between the new nations, the rivalry is a fierce one, and the matches tend to take on a significance greater than game itself. This is the first time the two teams have met since the 2008 Mumbai attacks, and Pakistani Prime Minister Yousuf Raza Gilani will be accepting the personal invitation of Indian Prime Minister Manmohan Singh, in a miraculous show of “cricket diplomacy”.

As a further example of how rabid cricket fans are, last week 1,000 tickets were made available for the World Cup final, and more than 10 million people flocked to the ICC’s site in less than 20 minutes, causing it to crash and burn.

Seeing as cricket matches can take up to 8 hours to play, certain countries may see a bit of a dip in GDP during tomorrow’s work day. My guess is that half of the Indian population will be using one of its “sick days” Wednesday.

For those in the U.S. interested in catching the match, it begins at 2am PST and can be found on Dish Network and DirecTV. For those without satellite TV, check out Willow TV’s website.

Cricket fans who also enjoy placing a bet or 600 while watching a match are advised to check out Khelo Cricket, a social game that allows fans to place bets and interact with friends in realtime during a match. The startup was founded by a group of cricket fans and alumni from Stanford University and MIT’s Media Lab.

The game works like this: At any point during a match, you can predict what will happen in the next play, based on your mad cricket skills and ill intuition. If your prediction proves to be correct, you win points. The person with the highest number of points at the end of the match wins. It’s as simple as that. The service is free, and unfortunately, it’s completely legal because there’s no real money at stake. It’s basically the same as playing free online poker, with the added social element.

So, to all those cricket fans out there, enjoy the remainder of the tournament. And please keep rioting to a minimum. Please feel free to chime in with your favorite cricket and tech-related applications, utilities, and services.