From the why-didn’t-anyone-think-of-this-before department: meet Heartsy, which is basically a Groupon for Etsy, i.e. a daily deals site for handmade items sold on Etsy stores.

The concept should be overly familiar to you: registered users get sent exclusive deals on handmade items sold on Etsy by email. Acquired coupons, or vouchers as Heartsy refers to them, can be redeemed at the Etsy store that sponsored the deal (example).

If you’re an Etsy seller, no need to do the math on it to see if it’s worth you while or not – someone already did that for you. (Spoiler alert: it depends).

Like many other daily deal sites, you get cash every time you refer a new user. Heartsy also cleverly lets you vote on what type of deals you think they should be running in the future.

Currently, Heartsy’s services are free, but don’t expect that to last long: a transaction fee will be added to the program in the near future. 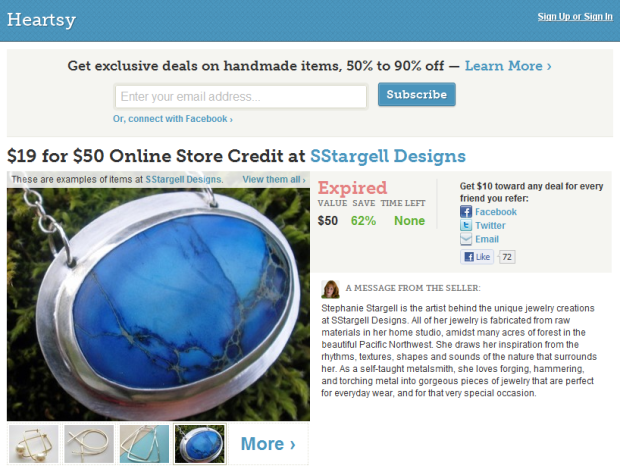