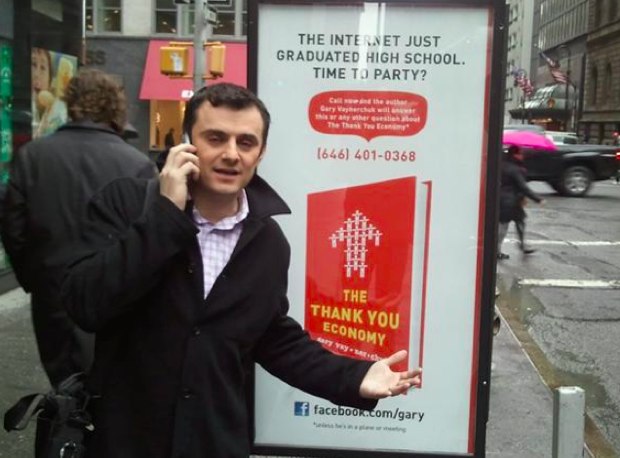 Gary Vaynerchuk is a busy guy. I don’t expect him to pick up the phone every time I call. After all, he’s on a book tour or something, and busy tweeting, and drinking wine. But then I saw the picture above. Yup, that’s Gary V on his cell phone in front of a poster advertising his new book, The Thank You Economy. The poster lists a phone number, (646) 401-0368, and asks prospective readers to:

Call now and the author Gary Vaynerchuk will answer this or any other question about The Thank You Economy.*

*Unless he’s in a plane or meeting

I thought I’d prank call him and ask him some questions about the book, like, “What the hell is the Thank You Economy?” His last book, Crush It!, needed no such explanation. The title says it all, and it’s fun to say (Crush It!”). The Thank You Economy sounds too polite and vague. I have no idea what it means. I guess I should read the book. But the poster promised me that Gary would answer these questions himself. All I can say is: False Advertising!* (*Unless he was in a meeting or something).

The outdoor advertising is kind of clever, though. Vaynerchuk bought the ads through ADstruc, which let him target them on 20 pay telephone kiosks in Manhattan around Grand Central, Union Square, the East Village, and near his publisher, Harper Collins. The whole thing cost only about $20,000. There’s even one near my subway stop. It’s as though he was daring me to call.

So I did. Several times. And, like a teenage girl, I was even a little bit excited. But then he didn’t answer. It went to voicemail. From what I hear, he’s only answered about 50 calls so far. Maybe you’ll have better luck. Go ahead, give him a call at (646) 401-0368. If he answers, he can explain what the book is all about. I tried.

Update: Gary was in a meeting, he finally called me back and he’s been answering a lot of calls since this post. He was a very good sport about the whole thing. Here is his video response.