It seems like Google has made a foray into the group messaging space today with Disco, a new iPhone app and website. Well, they sort of have.

The service utilizes the Disco.com domain that Google bought at Domainfest last year for $255K. The Disco.com site went up today and the beta app hit the App Store yesterday, but no one noticed it — until now. And here’s the thing: it was made by Slide.

We’ve been testing the app here at TC HQ and thus far its pretty fast, perhaps because it’s initial build is more bare-bones than fellow group messaging contenders like Fast Society, Beluga and GroupMe. It’s actually pretty similar to the initial build of GroupMe before it added push notifications.

Again, the app is made by Slide, the storied social apps property which Google acquired in August for $182 million. Slide has made iPhone apps before, but the last one was Super Poke, an app created pre-Google acquisition. But Slide is being run as an autonomous business unit within Google, so this app is unrelated to any Google “Plus One” social projects, we hear.

We’ve reached out to Google for comment on the app and will update when we hear back.

How the app will fare competing in the already saturated group messaging space remains to be seen, and you read MG’s take on it here.

In the meantime here’s two fun facts: that’s Slide founder Max Levchin’s Facebook photo in the app screenshot (he’s the one on the bike) and the sample group on the Disco homepage is named GaGa Fan Club, interesting light of Lady Gaga’s recent Google visit. 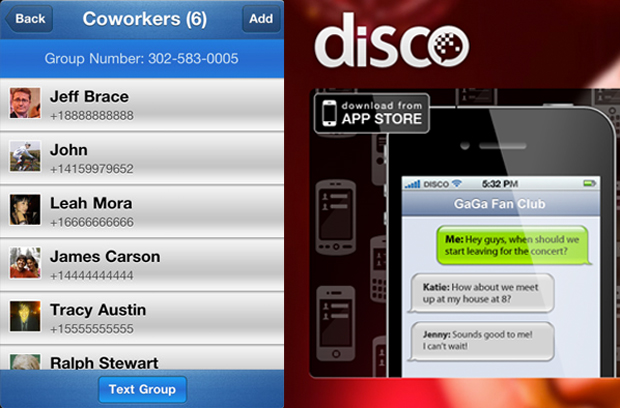