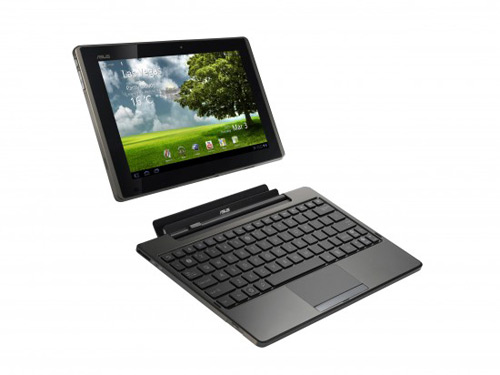 Asus has made its Eee Pad Transformer official. Never heard of the device? It’s been floating around for a few months now, including making a secretive appearance back at CES in January. To quickly describe it, it’s part tablet, part netbook. And here I thought tablets had replaced netbooks.

The Eee Pad Transformer’s biggest thing is that you can use it as a standard, Android 3.0 (Honeycomb) tablet. Surf the Web, fiddle about with apps, that kind of thing. But Asus decided that wasn’t good enough. “This isn’t good enough!” one of their engineers might have shouted once. So in addition to being a fully featured, as-you-like, tablet you can also use it as a netbook.

By setting the tablet in a small dock, you can then use the attached keyboard to use the device more like you’d use a netbook. Perhaps you find it’s easier to type when at as desk using a normal keyboard? That’s your call, I suppose.

The point is, it does both.

(No, there’s nothing stopping you from hooking up your iPad in similar fashion, but let’s not dwell on that for now.)

Oh, and it has a 16-hour battery. So says Asus, at least. That’s fairly substantial.

It’ll be released in Taiwan today (or it already has, timezones being the pesky things that they are), and Asus says it should be around $400-$700 (depending on accessories) when makes its way around the world.