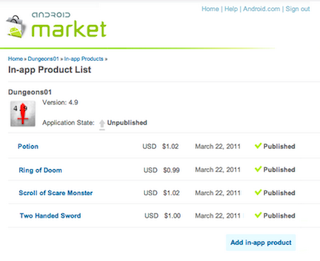 For quite some time now, Android developers have been waiting for the arrival of an in-app payment and billing system. Originally, Google said this was coming last year, but it was delayed by Christmas — or something. A few weeks later, Google showed off how it would work, but noted that it wouldn’t be available until this spring. Well, it’s finally just about here.

As is noted on the Android Developers blog today, Google has just opened up testing of the In-App Billing system. Writes Google:

In preparation for the launch, we are opening up Android Market for upload and end-to-end testing of your apps that use In-app Billing. You can now upload your apps to the Developer Console, create a catalog of in-app products, and set prices for them. You can then set up accounts to test in-app purchases. During these test transactions, the In-app Billing service interacts with your app exactly as it will for actual users and live transactions.

This will be followed by a full launch at some point next week, Google says without giving a specific day.

To get you started, we’ve updated the developer documentation with information about how to set up product lists and test your in-app products. Also, it is absolutely essential that you review the security guidelines to make sure your billing implementation is secure.