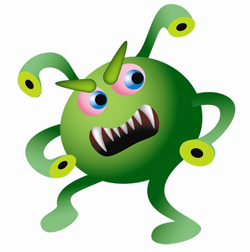 It was like a movie. Microsoft, working with domestic and international police, and with corporations like Phizer, had managedto effectively shut down the Rustock botnet last week. Almost overnight the total volume of spam—that was Rustock’s specialty—collapsed. But is the botnet completely shut down, or does its very nature prevent it from every truly being shut down?

The deal, by way of mighty Ars Technica, is that Microsoft (and a whole host of other entities) had managed to behead, in a sense, the Rustock botnet. Rustock had been around since late 2005, but didn’t peak until mid-2010. Its main activity was to collect computers and have them sent out junk email on-demand. The malware behind its propagation was, and still is, difficult to detect, meaning that there could be thousands of people—maybe even you!—who are infected but have no idea.

Just another reason to maintain your anti-malware software, and practice safe browsing habits.

And while the amount of spam passed around the Internet in the days following the shutdown went way down (technical term, yes), since there’s no easy way to determine if you’ve been infected, who’s to say if the botnet gets restarted, with its central servers in a country that wasn’t affected by the cutoff, it couldn’t set it off all over again?

The Internet: just more and more annoying to use.