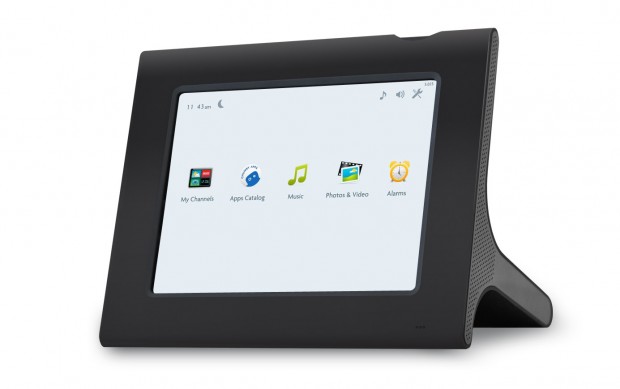 Everyone’s favorite extra screen/robot/app platform, Chumby, is back for another round. They showed off their new model at CES (where we interviewed them) but there was no sign of pricing or availability. No longer! The Chumby 8 (named for its 8-inch screen) will ship on April 5th, and you can pre-order starting tomorrow (the 23rd) for $199. Good deal? You be the judge.

The Chumby platform is a weird one, to be sure, but there are a ton of Flash Lite apps that should run just fine on the new hardware, and the 8″ 800×600 touchscreen is really quite practical for on-desk use. Plus there’s a full web browser. Although I have to say I’m sorry to see that their weird design has given way to something more anonymous (but practical).

It’s got an 800MHz Marvell CPU in there, 128MB of RAM, a mic, speakers, headphone out, and has SD and CF storage. Not nearly as powerful as today’s tablets, but if you’re looking for something stationary and quirky, it could be for you.

Here’s the full press release, which explains it better than I can, really:

San Diego, CA — March 23, 2011 — chumby industries today announced the release
of the chumby8, the much-anticipated next generation chumby device. Officially
launching on April 5, the chumby8 is priced at $199 and available today for pre-orders
at chumby.com/store. With a sleek new design, an 8-inch LCD touchscreen, enhanced
features, and over 1,500 free apps, the chumby8 delivers a personalized stream of your
favorite apps in addition to serving as a digital photo frame and music player.

“The chumby8 truly marks an evolution of the chumby device and software platform,
creating a more personalized and user-friendly Internet streaming device that
will complete any connected home or office” said Derrick Oien, CEO of chumby
industries. “We’ve taken the time over the past year to listen to chumby fans and owners
and incorporate their feedback into the new chumby8 and created a great multi-purpose
connected device capable of tailoring to all.”

New features of the chumby8 include:

New, modern industrial design available in black and red. Customized skins
available from Skinit
8-inch 800×600 touchscreen LCD
Two USB ports, CF and SD slots make it possible to upload pictures, music and
other personal media of your choosing turning your chumby8 into a personalized
digital photo frame and music player
New web browser support, allows you to access links within apps
Revamped UI and streamlined navigation allows you to manage apps and
channels directly from the device. The chumby8 comes preloaded with ready-to-
play themed channels showcasing the best chumby apps in entertainment, news,
humor, games, kids, sports and more
Updates to share features make it easier to send photos, videos and apps to
friends and family
Robust Internet radio offers over 10,000 internet radio and podcast stations,
including Napster, Pandora, SHOUTcast, iheartradio, Mediafly, New York Times
and CBS, with more to come.
Full alarm system allows you to wake up to your favorite music stations and apps
Task scheduler allows you to perform a routine task on your device like entering

The chumby8 has access to over 1,500 free applications— ranging from music and
social networking sites, news and entertainment gossip, to video clips and sports scores.
Content is available from well-known media sites including: YouTube, Facebook, Twitter,
MTV Networks, Groupon, People.com and many others. Users can monitor their social
networks, view and share their photos from sites like Flickr and Photobucket, watch
sports clips, play games, or choose from a multitude of clock applications to display on
the touchscreen device.

chumby industries, based in San Diego, California, is a software company that works
with consumer electronics OEMs to bring a rich and personalized Internet experience
to a multitude of connected products, ranging from devices as simple as clock radios
to high-definition televisions. The open chumby platform enables developers to easily
create Flash content for chumby-powered devices resulting in a constantly growing
catalog of more than 1,500 applications. For more information visit chumby.com or follow
us on twitter @chumby.