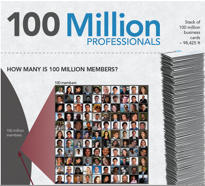 LinkedIn, which launched in 2003, says that it is now being used in over 200 countries, with more than half of its users originating from outside the U.S. To be exact, the U.S. has 44 million LinkedIn members, and there are 56 million members outside of the U.S. Brazil is seeing the highest growth rate, with new user adoption rising 428 percent year-over-year. Mexico is also seeing major growth, with membership growing by 178 percent year-over-year.

Currently 17.8 million LinkedIn users a members of the network’s Groups and 1.2 million post comments to Groups weekly. There are now over 2 million company pages, with eBay, Amazon, Apple, Cisco, EMC and Campbells as the most represented companies on the network based on the number of employees that are on LinkedIn. There are now 1.3+ billion connections between LinkedIn’s members and 79+ million job transitions/changes tracked on the network.

For LinkedIn, 100 million users comes with a caveat. As the company wrote in its S-1 filing, “The number of our registered members is higher than the number of actual members, and a substantial majority of our page views are generated by a minority of our members… If the number of our actual members does not meet our expectations or we are unable to increase the breadth and frequency of our visiting members, then our business may not grow as fast as we expect, which will harm our operating and financial results and may cause our stock price to decline.”

So while 100 million users is an impressive milestone, the company admits that its active users are below this number. How much below, however, is unclear. According to comScore, LinkedIn saw 71.5 million unique visitors worldwide in February.

And of course, it’s important to note that 100 million is one-sixth of Facebook’s 600 million userbase (Facebook saw 676.7 million unique visitors worldwide in February, reports comScore). But as the company prepares for a public offering, growth in terms of users will be an important selling point for potential investors. And LinkedIn’s revenue and profit is increasing steadily. It took LinkedIn 8 years to reach 100 million members; how long will it take the network to reach 200 million users?