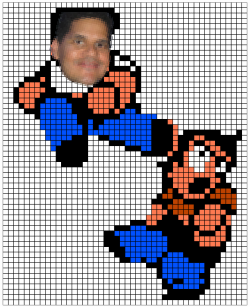 In stark contrast to the Apple Store’s bottom-up model for mobilizing games and apps, Nintendo’s Reggie Fils-Aime has said that his company isn’t really interested in that kind of model right now. In an interview with Gamasutra discussing indie game development, Fils-Aime said:

Although I’m a big fan of so-called “garage developers” (love the indie gaming scene), I can’t say I disagree with Nintendo here. The Wii in particular has been marred by “shovelware,” reducing the perceived value of a game on the system. They want to avoid that, and part of that is establishing certain standards for production values.

Setting the bar high means they won’t be a platform for new, experimental games that may find distribution on XBLA or PC, but it also means they maintain a high level of control and their platform will be seen as one where you can trust every release. At least that’s the idea. I’m not sure it works in practice, considering the amount of crapware on the Wii. But maybe he was just speaking hypothetically.

Among other things, Fils-Aime also addressed rumors of a Wii successor; we’ve heard from a few sources (none inside) that this E3 may see Nintendo breaking out its next-generation console, but Reggie dealt with that in a professional and non-coy manner: “The Wii has a long life in front of it. We’re still sitting at $199.” Yes you are, Reggie. But your sales aren’t sitting — they’re lying down.