Whenever a new car comes out, it’s always exciting to see new tech antiquating the old, a breath of fresh air, if you will. The 2012 Acura TL has been refreshed for the model year, with a host of upgrades and further refinements. Unfortunately, few of them were tech.

Acura has long been known for many industry firsts: VTEC, Drive-By-Wire, and torque-vectoring all-wheel-drive. And for the most part many in-car technology firsts: in-dash navigation, satellite-linked real-time traffic and weather, and XM and Bluetooth as standard equipment. Now, all this stuff is pretty much standard fare. 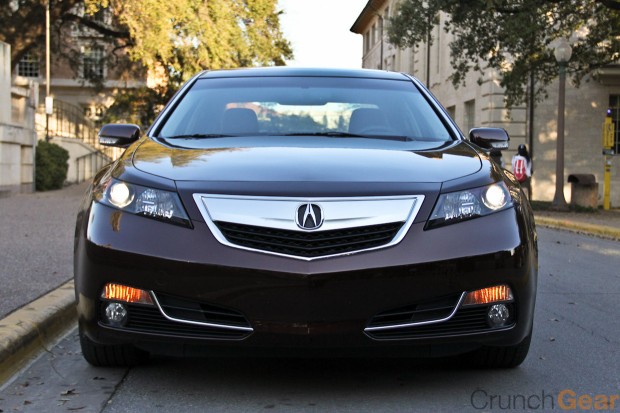 After the refresh of the TL, it’s apparent that Acura engineers took a more conservative approach to the car (unlike the older one), smoothing out bodylines and fixing the bold shape, as if performing rhinoplasty to Ashlee Simpson (she looked good before!). This is slightly unfortunate because I liked the bold and futuristic look. What nerdy futurist doesn’t like a car that looks like a spaceship from years forward?

The TL’s tech was pretty well equipped when the older, more rhino looking TL, launched in 2008. The features in the infotainment system were pretty good. For it’s year, having live traffic and weather makes for pretty appealing tech. When we drove the new 2012 TL, we were confronted with an accident ahead. The TL knew this ahead of time and took us off the expressway onto a road that ran parallel. We could see all the cars backed up for miles as we drove uninhibited along the road to our destination. 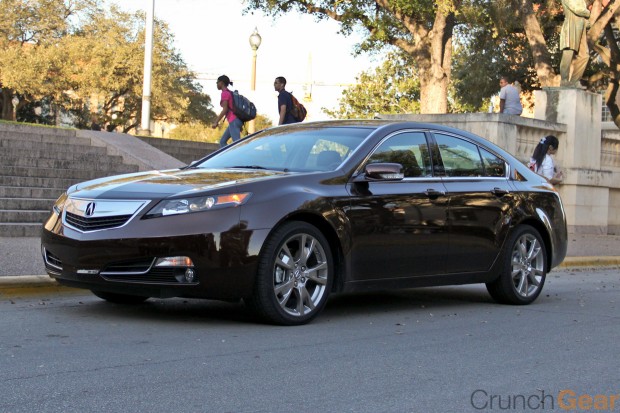 Another great feature is Bluetooth streaming. This along with intelligent keys satisfies our demand to keep both key and mobile in pocket at all times. The updated TL gets AVRCP 1.3 support to control Bluetooth-enabled devices. This means that the car is able to seek between songs and grab metadata from Bluetooth devices (the older system could only play/stop/pause). But, Bluetooth streaming isn’t good enough without the ability to access playlists and menus as if plugged into USB. That, however, won’t happen until AVRCP 1.4.

The sound system in the car is one of the best we’ve ever heard, provided you listen to DVD-Audio exclusively. The channel separation and sound staging is near perfect in 5.1. That’s right, near perfect, and a huge departure from two channel sound from USB, Bluetooth audio, or XM satellite. I still wish that SACD and DVD-Audio caught on. I’m glad to see Acura engineers include this feature in the TL.

Whenever traveling around and looking for places to go eat, dance or drink, the Acura system proves useful. It can call up a huge list of places, and even shows reviews from Zagat. Now, I could go into a huge rant about Zagat and how Yelp powered by a smartphone would be better. But I won’t. For those without such smartphones, they’ll be content using this. 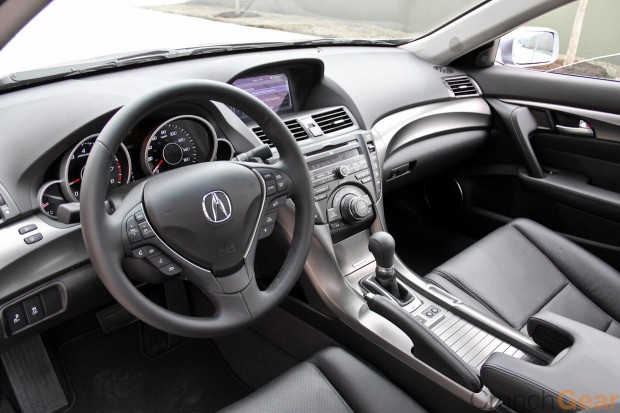 One thing I just couldn’t figure out was the voice recognition. When I did get it to work, it wanted to me to dial a number by saying them one-by-one. Also, if I wanted to say it by someone’s name, that would require setting up and recording voice tags first. Also, the new TL voice command offers the ability to call up music by artist, album, song, etc but it must have not liked my mid-western accent because it didn’t get a single one right. Luckily the USB connection was insanely fast — song scrolling was the fastest I’ve seen, ever.

So, the TL got a refresh but the infotainment didn’t. And personally, it didn’t need it just yet. When the car debuted in 2008 the technology was pretty robust. Considering the starting price for the technology equipped TL being $39,155, it’s not that bad at all. The technology on the TL can hang with the best at this price. I will say that this should be the last time Acura puts this system in the TL. By time the next generation is due to come out, in-car infotainment systems will be light years ahead. Plus, I want to see Acura do something big next, another “first”, if you will. Oh, and give Nuance a call, they can help with that voice recognition thing.