According to a Friday SEC filing, VIA Motors closed a $5.3 million series A investment in a deal that involved 44 angel, and friends-and-family investors. The filing reflects the potential for the company to take about an additional $5 million [for a total target of $10 million]. Carl E. Berg, a serial real estate entrepreneur and investor in electric vehicle technology, participated in the new round, and remains VIA Motors’ principal investor.

The company will use its new-found capital to take their electric range extended vehicles (E-REVs), namely trucks and sport utility vehicles, through a beta production phase and then to mass market production levels by 2013 said Richard Clayton, VIA’s chief financial officer on Friday.

VIA Motors’ E-REV trucks and SUVs have already been purchased by fleets at large, pilot customers, including PG&E. VIA will make these in greater numbers, relying on outsourced manufacturing partners through 2013, Clayton said. After that, VIA Motors is likely to invest in factories to assemble their own E-REV vehicles he confirmed. The company spun out from a the publicly traded company, Raser Technologies, in 2010. 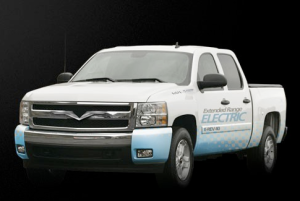 Today, VIA Motors acquires “fully contented vehicles” from original auto makers, then converts them into E-REVs by taking out the engine, transmission and components of the drive train, and replacing them with non-combustion technology.

VIA Motors’ batteries can last for forty miles, at which point their fuel-powered generator — which runs on gasoline, but in the future could be built to run on biofuels or hydrogen fuel cells — takes over. The generator serves to charge the battery. The idea is that drivers won’t feel “range anxiety,” like they might in an all electric vehicle without the auxiliary power.

Among others, VIA is converting Chevrolet Silverados, and in the past converted iconic gas guzzler brand Hummer H3 vehicles into E-REVs. The company’s technology differs from that found in most hybrid, plug-in electric vehicles (HPEVs) on the market today, like the Prius or the Leaf. To the general consumer, however, VIA’s trucks and SUVs feel like hybrids.

The company faces potential competition from the likes of Smith Electric Vehicles, a provider of electric trucks and vehicles to the Marine Corps, and several fleets for consumer packaged goods brands.

It could be seen as an acquisition target, or competition to the very original equipment makers from which it buys contented vehicles today, especially if those auto companies choose to develop their own electric range-extended systems and brands. VIA touts its vehicles as clean alternatives to traditional trucks and SUVs, that feel just as good as those traditional models.