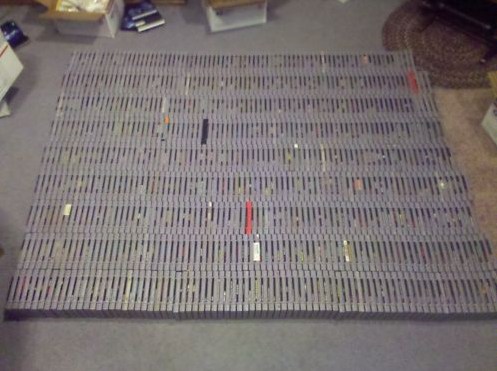 Have you ever wanted to own every SNES game ever (or at least the NTSC ones)? Well you’re in luck, if you’re also rich. A lot of all 720 games released in the US is on the block at eBay, a refreshing change from the many NES lots of the same type. It’s the ten thousand dollar price tag that gives me pause.

That’s an average of $14 a game. Now I know $14 is a huge bargain for Final Fantasy III or Super Mario RPG, but remember there are probably 600 games there you don’t remember and love. Remember Power Piggs of the Dark Age and Rap Jam: Volume One? Neither do I.

But for the completist, which really, these collections are aimed at, this could be a big break. I don’t see these SNES lots nearly as much as I’d like. Probably because the owners are busy playing through Secret of Mana for like the tenth time.