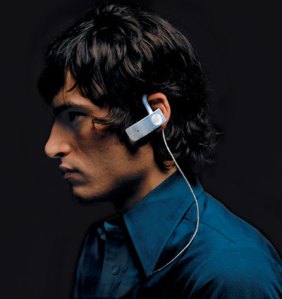 Jawbone, the company most known for the headsets seen on the terminally hip kid to your left, has raised $49 million from Andreessen Horowitz to continue to build new devices to take advantage of the smart phone/mobile Web boom. Marc Andreessen and Ben Horowitz invested in Jawbone as angel investors back in 2007, and CEO Hosain Rahman credits Horowitz as one of his most important mentors. Finally, he’ll be on Jawbone’s board.

This round brings Jawbone’s capital raised to date to just under $100 million. That’s a lot of money. But I’m actually surprised they hadn’t raised more. The biggest reason VCs give for not backing more consumer electronics companies is how capital intensive they are, compared to lean and mean Web companies. But getting to a point where you sell 10 million devices in three years doesn’t sound capital intensive– especially when you consider the mega rounds it’s taking to scale the biggest consumer Web names.

Part of that is discipline. Rahman can’t promise investors some wild yet-to-be-discovered business plan, nor can he rely on A/B testing or a release that can be tweaked after it ships. He simply has to make great devices from the beginning that people will buy for more than it costs to make them. And China has been indispensable in making that happen, he says. He’s far from alarmists who worry about the threat of those cheap China goods encroaching on American innovation. He’s not particularly concerned with knock-offs, because he considers Jawbone’s emphasis on software a differentiator that plays to Silicon Valley’s strengths.

But even if that were a concern, the benefits from China have far outweighed that risk. “We couldn’t have done this without the ability to do business over there,” Rahman says. “The difference between China now and when we first started going over there in 2002 is amazing in terms of craftsmanship and attention to detail.”

The impact in terms of flexibility, cost and speed to a product enabled by China’s manufacturing rise and sophistication is analogous to the role open source software played between Web 1.0 and 2.0– when the cost of creating a product fell by more than 90%. The difference is that unleashed a fury of new innovative Web startups. Meanwhile, the Silicon Valley establishment has mostly ceded this current renaissance in gadgets to Apple, Google and a few other giants. I’m hoping the success of companies like Jawbone and Square could finally spark a new Valley grown gadget revolution.

Not that navigating the Asian manufacturing world is easy. What Rahman has learned since 2002 will be especially important as Jawbone continues to rapidly get new products to market as the smartphone boom takes off, enabling the digital lifestyle of a new generation of road warriors and bored Asian kids sitting in traffic. Last year’s Jambox speaker has sold better on a relative basis than any device Jawbone has made, and it’s recently announced a creepy-sounding new product called Thoughts that combines audio Tweeting and Blackberry messenger. (This may not sound that exciting to an iPhone generation, but I’m writing this from Indonesia where, trust me, the very idea of this is like peanut butter and chocolate; a combination of their two favorite things in the world.)

We’ve invited Rahman to keynote our Disrupt conference in Beijing next fall to talk more about how Web companies between Silicon Valley and China can benefit from the same win-win cooperation between hardware companies in the two countries. Feel free to apply more public pressure in the comments.