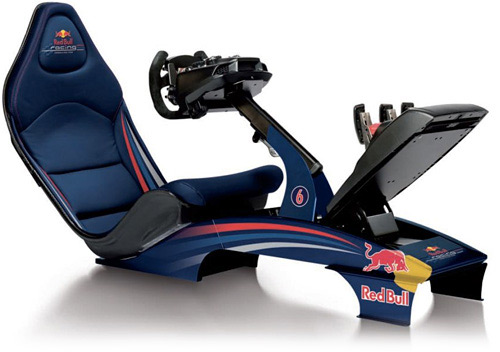 Is Red Bull once again the team to beat in Formula One this year? It certainly looks that way, if the past few weeks of testing in Barcelona are anything to go by (and they are). We now segue into Playseat’s Red Bull-branded racing simulator. It’s quite… substantial.

The idea is to try to replicate the feel of driving an F1 car, specifically Red Bull’s new RB7. The seat is in the same position, relative to the steering wheel and pedals, that Sebastian Vettel and Mark Webber will find themselves in in just a few weeks’ time in Australia.

Presumably you’d want to hook the simulator up to F1 2010 (any system), but it’ll work with any racing game, such as the upcoming Shift 2: Unleashed.

The only problem, I suppose, is that it’s a little expensive at $1,300. That’s the special price, mind you—regular price is $1,400. But certainly if you have the money laying around, and have the space, it’s probably pretty neat. I have neither, so I’ll have to stick with passively watching Vettel and Webber pretend to be friends throughout the year.