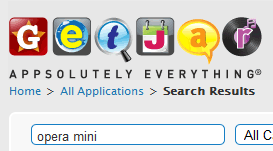 According to a tweet from GetJar Networks, which provides an alternative, platform-agnostic mobile applications marketplace, the Opera’s Mini browser has been kicked off the alternative app store offered by the Lithuanian company.

The reason for the ban (based on later messages GetJar posted on Twitter – they say an explanatory blog post is coming soon) is that Opera Mini now boasts an app store of its own, courtesy of a partnership with Appia (formerly PocketGear).

The news of Opera Mini’s ejection from GetJar’s marketplace was first reported by PaidContent.

GetJar responded to someone on Twitter who cynically stated that it “looks like GetJar isn’t the anti-App Store after all” that it would explain the reasoning for the Opera Mini ban in detail on its developer blog later today, but added to the tweet that “we all have to make a living”.

Translation: GetJar is clearly not going to allow competing mobile app stores to enjoy the marketing and distribution power of its network because it would have a direct impact on their business. Appia says it offers 140,000 free and paid apps, which is roughly the same amount of apps and games GetJar claims it offers.

Update: a reader suggests the possibility that GetJar bid for Opera’s inclusion of its app store in its mobile browser products but lost out on Appia. Neither company has confirmed, but something to think about.

GetJar has raised $42 million in venture capital from Accel Partners and Tiger Global to date – the company secured a $25 million round last month.

As we have worked closely with GetJar for a number of years we would like to find a solution to still be part of their offering. Opera Mini has been one of the most popular downloads in GetJar’s system historically, so we also believe this means that their users are missing out on a popular app.

We are in dialogue with GetJar about the process going forward. At this stage we can not confirm anything.

To be continued, in other words.

This week we had to take a very drastic and unusual step at GetJar: to remove one of our long-time favourite apps. This is something that we don’t take lightly and is nearly unprecedented in the 5+ years we’ve been distributing apps to consumers in more than 190 countries. The app in question, Opera Mini browser, had racked up more the 30 million downloads on GetJar over the last several years and was one of the most popular apps in the browser category. It was also the winner of the prestigious Gettie Award last year for best mobile app in the Windows Mobile category.

So why did we do this?

Apps on Getjar are free to download. This has always allowed us to provide quick, unrestricted and worldwide access to apps for all our users. It’s a central part of our business and philosophy and one that we find fundamental to allowing consumers to try great content no matter where they live and how they want to consume apps. However, to keep our service running GetJar needs to make money ;)

The simple problem is that Opera mini decided to include a competing app store in its browser. Although we don’t have any issue with this in principle, in practice it means that consumers might start using this app store instead of visiting GetJar to get their favourite apps. This robs GetJar of traffic and therefore of the advertising necessary to keep our service free for the more than 25 million consumers that use GetJar. It also jeopardizes an ecosystem that has generated over 1.6 billion downloads for tens of thousands of developers who depend on us to make money from their apps.

Don’t get me wrong: we’re happy to go head-to-head with any other app store and are certain that once you’ve tried the Opera App store you’ll find the depth of content, discovery and download from GetJar more compelling than ever. But it’s an another thing entirely to help competitors grow their business at our expense or that of our community.

We spent many months negotiating with Opera to avoid this scenario and are disappointed that GetJar consumers will no longer have access to Opera Mini. Fortunately, there are a number of excellent options on GetJar for our users including Bitstream Bolt, UC Web browser and Squace. All are excellent products.

In the meantime, we hope to resolve this solution with Opera in the future and want to thank you all for being such dedicated GetJar fans ;)