When RockMelt launched its new browser in private beta last November, it was greeted with an avalanche of press. RockMelt is a new social browser built around Facebook, realtime feeds, and faster search. The fact that Netscape founder Marc Andreessen is a major backer probably had something to do with the intense interest also.

Reviews were mixed and then interest sort of died down. The only way you could try it is if a beta user sent you an invite. Until now. After more than 15 updates and months of testing with “a few hundred thousand active users,” says CEO Eric Vishria, he is ready to open up the browser to anyone who wants to try it. You can download it here at RockMelt’s site.

RockMelt is built on top of Chromium, the same open source browser that is the foundation for Google’s Chrome. It updates at about the same pace, give or take two weeks. One of the biggest criticisms of RockMelt is that it’s Chrome, but with extensions that are forced on you. RockMelt adds a rail on the left with all of your Facebook friends who are online with presence indicators, and another rail on the right with all your RSS feeds, Twitter and Gmail accounts, and custom apps. But you can hide those if you don’t like them and you can also use any of the Chrome Apps available in the Chrome Web Store.

RockMelt is not for everybody, but between 20 percent to 30 percent of those who have tried it so far are still active users, meaning they’ve fired it up in the past 7 days. (Less than one million people have downloaded the browser and registered). Active users on average have the browser open 6 hours a day, interact with their Facebook friends on the left rail 3 times a day, and with the feeds and apps on the right rail 2.5 times per hour.

And it’s not just about Facebook. Half the users have added their Twitter feeds as well. The majority of users—65 percent—are international.

Now the true test will begin. With no barriers to trying the app, will more people give it a shot? The truth is that if RockMelt wants to enter the pantheon of great browsers, it will have to grow from hundreds of thousands of active users to hundreds of millions.

Like I asked on Twitter, for those of you who have tried RockMelt, are you still using it? Tell us in comments why or why not. 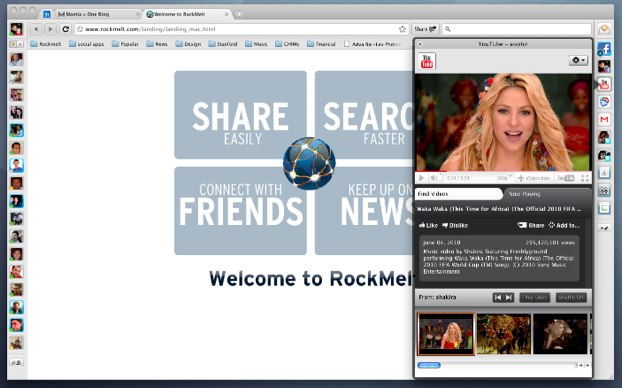