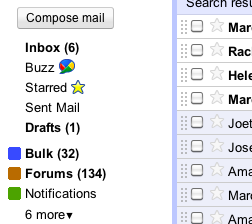 Back in August, Gmail launched a new feature that’s proven to be one of its most effective tools in the fight against email overload: the Priority Inbox. The feature attempts to automatically sort your incoming email based on importance, and while it’s far from perfect, it has led to a 15% reduction in the amount of time people spend staring at their inboxes.

It’s a solid feature, but the Gmail team knows that the battle against email overload is still far from over. So today it’s launching its next weapon: Smart Labels. Activate it, and Gmail will begin to automatically tag certain inbound messages as ‘Bulk’, ‘Notifications’, or ‘Forums’ and handle them accordingly.

The labels themselves are pretty self-explanatory. Notifications include updates from Facebook, Amazon shipping confirmations and other messages that may not be from someone you know but contain important information. And Forums consist of messages from any online message board you may take part in. Messages that appear to be sent as part of a mass mail list will probably be marked as ‘Bulk’ — by default these will skip the inbox, while Forums and Notifications will be kept in the inbox by default.

You can, of course, tweak these initial settings to route each type of message where you want it. Gmail can also automatically label incoming messages as ‘Personal’ or ‘Promotions’.

For those of you who have already set up a complex array of Gmail filters, Smart Labels probably won’t be a huge deal — I’ve long since set up filters to automatically sort through my Facebook notifications and Groupon deals, for example. For everyone else, it could prove quite handy. Just remember that if you decide to start routing incoming Bulk messages or Notifications so that they skip your main inbox, you’ll have to occasionally click the label at the side of the screen to see these new messages.

To enable the new feature, you’ll have to go to Gmail’s Labs section, where it’s listed as ‘SmartLabels’. Unlike Priority Inbox, which Gmail prompted everyone to try out, Smart Labels will be tucked away under Labs for the time being.

It’s worth noting that Hotmail (yes, Hotmail) has offered a similar feature called Sweep that lets you route certain types of messages en masse. The difference is that Gmail Smart Labels will attempt to automatically detect the type of message without any user input required, while Hotmail requires the user to specify which senders they want to have ‘Swept’ away.