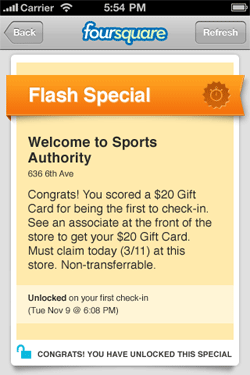 Over the past few days, Foursquare has made headlines for a partnership with American Express, and for a completely revamped version of their mobile experience on the iPhone and Android phones. And they’re not done yet.

The latest bit of what co-found Dennis Crowley calls Foursquare’s “shock and awe” campaign (leading up to SXSW later this week), may be the most important. It certainly will have the deepest ramifications for their eventual business model: a totally revamped Foursquare Merchant Platform — one that is completely automated.

Crowley notes that Foursquare first started taking the steps to make the service a platform for merchants in late 2009. And by early 2010, the model was already breaking out. But it was all manual work. “It used to be Tristan [Walker, head of business development] answering the phone,” Crowley says of how merchant deals got done. As bigger brands started to show interest, that method didn’t scale. Foursquare knew they had to build a fully automated system.

Things like merchant verification moved towards an automated phone service. But that also wasn’t good enough for what Foursquare needed. So they built a set of robust tools that will now work for business large and small — from a single mom-and-pop store, to a chain with thousands of locations around the world.

Once a business is verified with the new system, they’ll be free to use these tools as they please. They can create deals on the fly and have them up and running across Foursquare’s network in minutes. That includes all of the new types of deals that Foursquare announced today as a part of the 3.0 release (Flash Specials Friend Specials, Swarm Specials, Newbie Specials, etc). And here’s one key to all of this: Foursquare already has 250,000 verified businesses in their database. These new tools empower every single one of those immediately.

Along those lines, Foursquare is now giving merchants aggregate stats to show how well their specials are working. Previously, you could only see one special’s stats at a time. Now you’ll be able to see the big picture and compare and contrast how the various specials are doing. 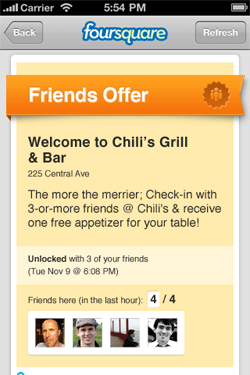 Merchants will also now be able to take advantage of Foursquare’s new “Specials Nearby” area of the newly revamped apps. And they’ll be able to see what kind of check-ins this is bringing in.

All of this will be extremely useful when it comes to merchants interacting with Foursquare’s nearly 7.5 million users. In fact, these tools should spark a true explosion of digital loyalty and deals across the Foursquare ecosystem that could ripple across the entire location industry.

But the obvious next question is: does this mean big business for Foursquare as well? As in: cold hard cash?

Crowley says that while all of this is a potential foundation for Foursquare’s eventual business model, “we won’t charge for something still being baked.” “We’ve always said we won’t monetize until we get it just right,” he continues, noting that they’re getting closer with these tools, but not quite there yet.

For now, with the new tools, Foursquare will have to simply be proud of the big names already interested in the platform. These include names like Sports Authority, Applebeels, RadioShack, The Coffee Bean & Tea Leaf, Barnes & Noble, Arby’s Chilli’s, Whole Foods, Toys R’ Us, and H&M.

As for gaming these new deals, the same system Foursquare has used for a while remains: users are welcome to check-in where they please, but deals require the check-in to be location verified. And, obviously, you have to present the deal on the screen to a person working at the venue to redeem it.

Expect a lot of merchant deal action going down this week in Austin, Texas while the new system is put to the test during SXSW. Merchants should look for the new tools to go live on Friday. 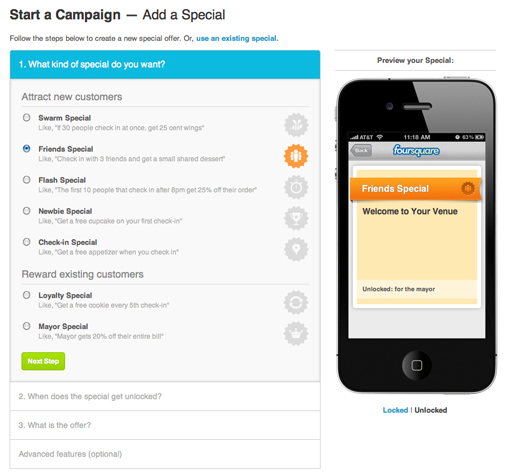