We’ve had a few editorials here lately regarding China. I wrote about our moral hypocrisy in disapproving of factory conditions there, and John wrote how the lowest-price-possible culture still extant in much Chinese manufacturing is harmful in a number of ways. Throughout, I think there has always been a sort of grudging admiration for the way that country is capable of single-mindedly pursuing certain difficult goals via public-private alignment, investing billions in infrastructure in order to be a market leader ten or twenty years down the line.

One development I wasn’t aware of was their effort to separate themselves from western companies in the computing field. While many of the chip manufacturers and specialized factories used by Intel, AMD, Nvidia, and ARM are located in China, the design work is largely done internally, and in this respect Intel et al. are literally decades ahead of the “competition,” which really is nothing of the sort. This is something China wants to fix — and they’re taking concrete steps towards doing so.

They’re now in the process of a big switch to Chinese-made processors in their supercomputers, the kinds of room-filling machines you find at research centers, universities, military facilities, and so on. Currently, the National University of Defense Technology’s “Tianhe-1A” (Milky Way/Sky River) is the world’s fastest supercomputer, and it runs on Intel and Nvidia chips — 21,522 of them, comprising around 2.5 petaflops of data-crunching power. But the new “Dawning 6000” is to be built entirely from “Loongson” chips, designed by the Chinese Academy of Sciences and built, ironically, by a European company, ST Microelectronics. It will have less than half the processing power of Tianhe-1A.

The chief designer of the new chips, Hu Weiwu, told the People’s Daily regarding the chip’s origins: “Our information industry was using foreign technology. However, just like a country’s industry cannot always depend on foreign steel and oil, China’s information industry needs its own CPU.” Admirable! But, as I mentioned in Our Great Sin, many in American industries are loath to take this step. The benefits of a global manufacturing economy are too convenient, and the prices too competitive, for us to cut ties. 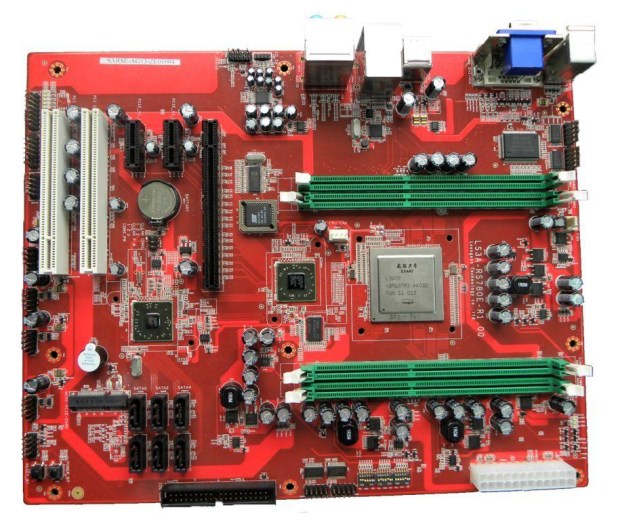 Imagine the US and China are playing with a bunch of toys. The US is mad that many of the toys belong to the China, but we’re unwilling to invest in a toybox as big as the other guy’s. China, on the other hand, sees the toys the US has and starts building new ones to replace them, so if the US packs up and leaves, China won’t have anything to play with. Is this metaphor too much? Probably.

This isn’t a recent development, and it isn’t a “hobby.” China’s been making CPUs for almost 10 years now, though it’s only recently that they’ve even begun to approach the level of effectiveness provided by western systems. And even then, Hu cautions that “it still needs another decade before China-made chips meet the needs of the domestic market. Hopefully after two decades, we will be able to sell our China-made CPUs to the US just like we are selling clothes and shoes.” Still, they’re on track to reach their goal of converting their supercomputers to domestically-developed CPUs by the end of 2011.

In other words, they may be able to manufacture our chips at a 20nm level, but their CPU design and software are still pretty much in the dark ages. Tianhe-1A runs a Linux-based system (which, although it has largely American origins, should really be considered the first post-national OS) and uses a MIPS architecture that emulates x86. I’ll give the computer scientists reading this a moment to clean the coffee off their monitors. But yes, this is where they’re at, and although they’re a decade from producing a world-friendly laptop or mobile that’s Chinese from processor to case to OS, make no mistake: they’re taking dead aim.

The point is they’re cutting the global cord when it comes to CPUs, a very difficult thing to do when the entire world runs on just a few brands, and those brands spend billions every year to maintain market dominance. Splitting off from the majors and declaring independence, no matter the cost. Sound familiar? Yeah, for a long time that was kind of the American way. We still maintain a huge advantage in internet-based properties, IP, biotech, and culture, but in areas we’re trailing, it seems we don’t have the backbone to say “your product may be better and cheaper, but we’re going to build our own, because dammit, that’s what we do.”

Perhaps we’re reaching the end of a period of natural Chinese ascendancy (as they emerge from industrialization hell and mobilize their billion-strong human resources on the world more efficiently) and perhaps not, but tech is notoriously difficult to predict, and a few breakthroughs and funding rounds might put the US on top in growing fields like battery tech or low-carbon manufacturing. It’s too late for us to lead the world in the areas China specializes in, and if we’re not careful, their sovereign writs of bootstrapping will only increase the number of those areas.

It sounds a bit jingoistic, but it’s really not (though I’m aware my saying so doesn’t make it so); I’d feel the same way if it were France, Brazil, or Canada opting out of the microprocessor hegemony. It’s just that nobody likes the kid with all the toys.

Update: Many commenters seem to think (I don’t know why, it’s not implied by this article) that China is copying or ripping off Intel &c. That is not the case. The latest Loongson processor is the result of ten years of research. We’re not talking about some sweatshop churning out cloned Core 2 Duos. This is hundreds of millions in R&D producing an original product to replace foreign technology China was uncomfortable relying on.