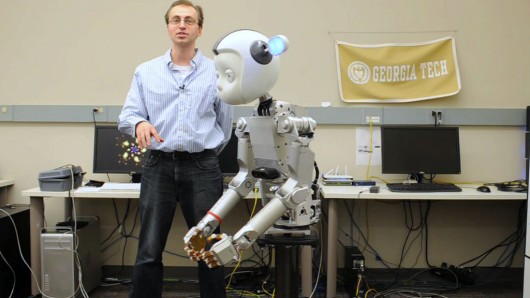 There has been a lot of news lately about robots andresearch making them more human-like. This research project at Georgia Tech’s College of Computing is investigating how humans see actions and motions of robots. Part of the research is creating fluidic motion for robots and having humans guess what the robot is doing, just by observing body language.

Instead of choppy stop and go sequences, the researchers programmed the movements to run into each other in a smooth fluidic motion. “When the motion was more human-like, human beings were able to watch the motion and perceive what the robot was doing more easily,” said Ph.D. student Michael Gielniak.

The next step is to add variety to robot movement. “So, instead of having the robot move the exact same way every single time you want the robot to perform a similar action like waving, you always want to see a different wave so that people forget that this is a robot they’re interacting with,” said Gielniak.