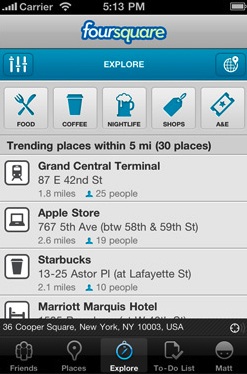 We’re now just days away from SXSW. And a service that launched there two years ago and made a name for itself last year, is aiming to make another splash this year: Foursquare.

The service will tonight launch an updated version of their app, 3.0, which will contain a number of feature upgrades. Chief among them: a new “Explore” section, new types of deals, and a revamped leaderboard for points earned in the app. Yes, Foursquare is putting some fun back into the game element of the service.

I have fond memories of first using Foursquare two years ago at the conference while competing against my friends for the most points to stand atop the leaderboard. But as time went on, this element of the game became less and less interesting. Co-founder Dennis Crowley has long promised that they’d revamp the point system to make it fun again, but two years passed, and not much changed. Until now, finally. “Been on my list to fix since, hmm, March 20, 2009,” Crowley jokes.

But it’s also about more than just having fun at SXSW. “It’s trying to make it work everywhere, all the time,” Crowley notes. To that end, the new point system will reward you for different types of actions (finding new places, going to new cities, being more social). It’s all about motivation and encouragement for doing different types of things in the real world.

The bigger aspects of the new app from a broader perspective are likely the other two updates. New types of deals (like the ones Foursquare is doing with American Express) will push their business model forward. There will be six new types of deals that merchants can offer. One is a “Friends Offer”, which entices you to check in with some of your friends to unlock deals. Another rewards loyalty beyond mayorships (which are becoming harder and harder to get as Foursquare grows).

Meanwhile, the recommendation engine will make the mobile apps more useful to people on the go. Foursquare will look at your check-in history and recommend places you might enjoy. There’s a social element to it as well as it’s an evolution of the “Tips” area. And they’ll let you know why they’re recommending the place (your friends liked it, etc).

Again, look for the new version of the app tonight for iPhone and Android (BlackBerry users will get a new version later this week, but not with all of these same features). 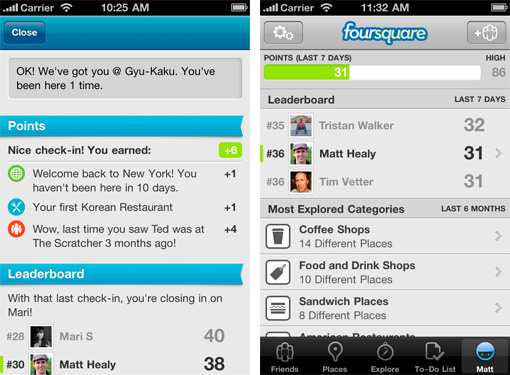 Update: Foursquare has a lot more detail in their blog post on Foursquare 3.0. Some things of note:

Update 2: And the iOS version is now live in the App Store here.