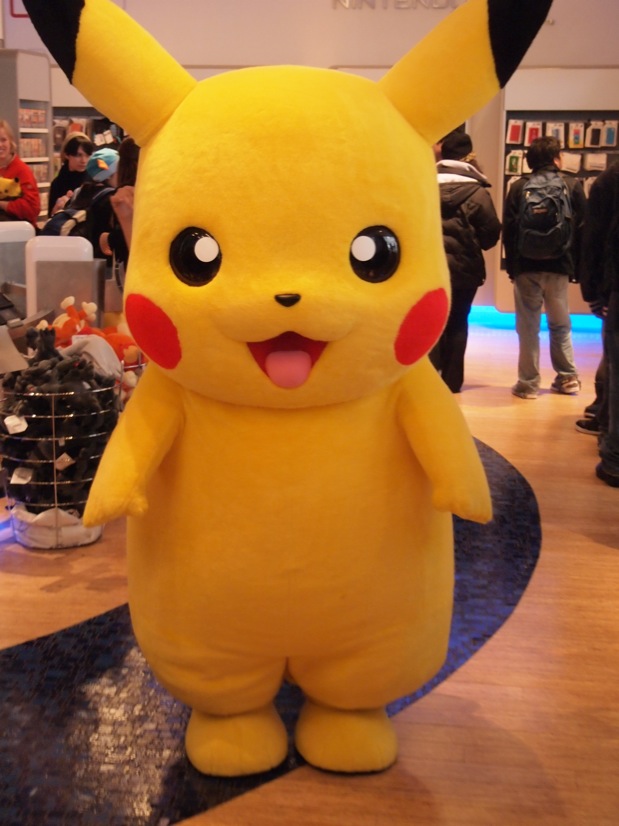 As the father of a freshly-minted Pokemon fiend, I find myself more and more often forced into the vicinity of Piplip, Liepard, and Purrloin than I’d like to admit. I was pleased, then, that I could bring my son to Saturday’s “Pokemon Festival”/Pokemon White/Black Version launch where we were able to play the new games, Black and White, and enjoy the song stylings of Presidents Of The United States Of America (POT USA, for those who have forgotten they were once a stoner band) who now sing the Pokemon theme. The more things change…

The game, needless to say, features some kids running around and collecting ’em all. These wildly popular and well-reviewed games are excellent for kids between the ages of about eight (just when they’re starting to read well) and, judging by the crowd at the Nintendo store in a line that wrapped around the block, about 25. Like Harry Potter, a Pokemon launch is a mix of nostalgic young adults who grew up with the franchise young kids just joining things with the latest incarnation. As this reviewer on IGN notes, “Current fans are so young that I feel like a creeper every time I go to a Pokemon event.” You, sir, are correct and you are a creeper, but that shouldn’t hamper your fun!

The new game is basically more of the same with 100 or so new Pokemon on the landscape. The gameplay is smoother than SoulSilver/HeartGold and these games don’t use the Pokepedometer AKA the Pokewalker. It’s a very accesible story and even if your kid, like mine, lazies out of reading the text they can still follow along.

Pokemon is a franchise that many of us older gamers never followed, but that doesn’t mean kids won’t enjoy the collecting and evolutionary aspects of the game. I was also impressed with the strong and loyal following who came out for the game launch. If this had been a Zelda title I would have geeked out with them but as it wasn’t I just couldn’t feel the energy as much as my son did. Incidentally, Pokemon doesn’t lend itself to effective cosplay and there were no hot women dressed as Link or Samus in this line, just one presenter dressed as sexy Professor Juniper and another Pokelady dressed as sexy Ash with her friend dressed in an ill-fitting Pikachu suit. It was enough to make this old man feel like a creeper.

As a side note, I have a copy of Pokemon White Version to give away, so drop us a line in comments and I’ll pick one winner at random this afternoon. I will, in effect, choose you.