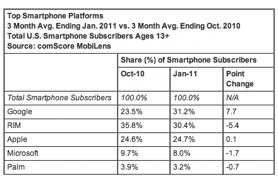 comScore’s monthly smartphone data is in and it looks like for the first time Android OS has surpassed both Apple’s iOS and RIM in terms of U.S. smartphone subscriber share. The data, which measured smartphone usage from October 201 until January of 2011, showed that 65.8 million people in the U.S. owned smartphones during period, which is up 8 percent from the preceding three month period. While Android passed iOS in terms of subscriber share in the previous period, this is the first time the Google-developed OS has unseated RIM from the number one spot. 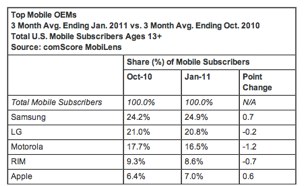 In terms of total mobile device usage, 234 million Americans ages 13 and older used mobile devices for the period. With respect to manufacturers, Samsung ranked as the top OEM with 24.9 percent of U.S. mobile subscribers, up 0.7 percentage points from the three month period ending in October. LG ranked second with 20.8 percent share, followed by Motorola (16.5 percent), RIM (8.6 percent) and Apple (7 percent).

While Android has been eating away at iOS market share, this month’s data shows that the OS is also taking some of RIM’s market share. comScore’s data represents one report in a sea of many similar findings that show that Android is growing fast. But a recent Nielsen report pointed out that because RIM and Apple create and sell their own smartphones with their operating systems, these companies are actually in a better position in the three-way race (in terms of device manfuacturers). Because Google licenses its OS to device manufacturers, the Android ecosystem is more fragmented.

While Android is looking strong, the race has not been won yet.