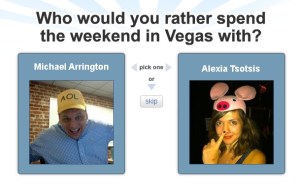 A few weeks back, everyone lost their mind over Cubeduel, the social game that blended Hot or Not with LinkedIn. In fact it was so popular that it exceeded LinkedIn’s API limits and was briefly shut down.

Now another player is entering the Hot-or-Not-For-X arena, but this one is aiming to be the Hot or Not For… Basically Everything.

The idea behind GotoGuru is hardly rocket science. You login with your Facebook credentials and are shown pictures of two of your friends, along with a question – say, “Who would you rather spend the weekend in Vegas with” (GotoGuru shares Cubeduel’s love of dangling prepositions). You make your choice and then are shown two more friends, and two more, and two more – until you’ve completed enough “duels” to complete the “level”.

It’s the game element that makes it fun: with each level the questions change, and so does the friend pool from which the choices are drawn. By level two you’re not just limited to your own friends, but those of other users — and by level four you get to see how you’ve been rated by others. At level five you can create your own questions.

The site’s creator, Lunch.com‘s JR Johnson, admits that GotoGuru is mainly just a fun side project to give his team a break from their day to day work on Lunch. But Johnson has a healthy track record in developing communities into big businesses: in 2008 he sold his VirtualTourist travel community to TripAdvisor for a reported $85m.

Johnson says he already has plans to develop a blogging and social sharing platform for GotoGuru where users who have reached “guru” status can share information on their specialist subjects.

Whatever. Right now I’m just having fun judging my friends. (For the record – no offense Alexia – but in the choice above Mike wins by a mile.)