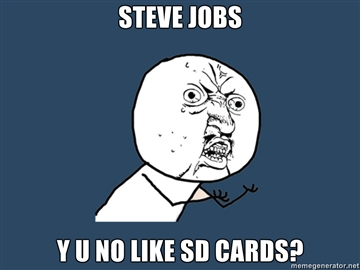 It packs a faster CPU, more powerful graphics engine, a fancy magnetic cover, thinner casing, herp, derp and more. It’s a fair upgrade from the original although it’s erroneous to call it revolutionary; evolutionary is more like it. In fact, there is still a fair amount of major features missing from the platform. Some of them are big enough to be dealbreakers, too.

Alright, Apple. It’s beyond silly anymore how dependent iOS devices are on iTunes. Cut the cord, Mom. Let your children run free! Look at Android. Those devices are living free and crazy lives without ever having to plug into a computer for nominal updates or information merging.

It’s not that hard – just offer a similar experience to AirDrop, the file sharing system that will appear in OS X Lion. There should be no reason that our iPads go music-less because we forgot to plug them in every evening.

The iPhone 4’s retina screen was a game-changer. It’s still perceived as the best mobile screen on the market eight months later. The iPad’s screen is nice, sure, but so are the incoming Honeycomb tablets’. They’re close enough that fanboys of either faction can argue endlessly at their merits. The iPad 2’s IPS screen is nice, but it’s far from a retina display. Let’s hope iPad 3 will have that high-rez screen we keep hearing about. Let’s step it up, Apple.

Do you know the Samsung Galaxy Tab can take a hammer to its screen? You can shoot steel BBs at it while jabbing at it with an ice pick. The Gorilla Glass is seriously tough. Chances are Apple looked at putting some high-strength glass on the iPad, but the company’s obsession with style and design probably trumped screen durability. The iPad 2 is 30% slimmer. Gorilla Glass would have probably affected that stat. However, I for one would rather have a slightly thicker tablet and know it can take a kick to the delicates.

There’s a laundry list of reasons the iPad doesn’t have expandable memory – it limits hacks, validates pricing by memory size, it allows Apple to sell add-ons – but not one counters the sheer amount of functionality that an SD card slot would bring to the platform. It’s the prime reason I didn’t buy the first iPad and one of the many reasons I’m skipping this one as well. Sure, the iPad is post-PC, or whatever nonsense Steve Jobs stated today, but that doesn’t mean it can’t carryover some PC tricks.

You see, the iPad is still a computer, just one where the OS is hidden by a fancy skin and the experience is closely guarded by Apple designers. Apple is bringing much of the iLife suite to the iPad and so with iMovie, Garage Band, and whatever else is in store later on, and the lack of easily transferable memory is a big downside to the iPad.

4G – or rather what carriers are calling 4G – is still rolling out but the iPad 2 is taking a pass. There’s a model set for both GSM and CDMA networks, but unlike the Xoom, the tablet is not upgradeable to 4G. Apple’s likely holding that out until chipsets shrink in size and power consumption and providers roll out the network to more markets. That will happen probably just in time for the iPad 3 or iPad 4.