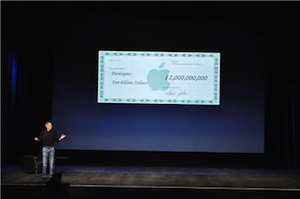 Today at their event in San Francisco, a familiar face took the stage: Apple CEO Steve Jobs. And he kicked things off with some big numbers. The biggest was this: 200 million people now have Apple ID (iTunes) accounts. These are accounts tied to credit cards with one-click purchase access.

“Amazon doesn’t publish their numbers. But it’s very likely that this is the most accounts with cards anywhere on the Internet,” Jobs said.

Another massive number Jobs shared: Apple has no paid out over $2 billion to app developers directly thanks to all those cards tied to the App Store.